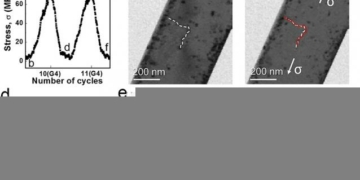 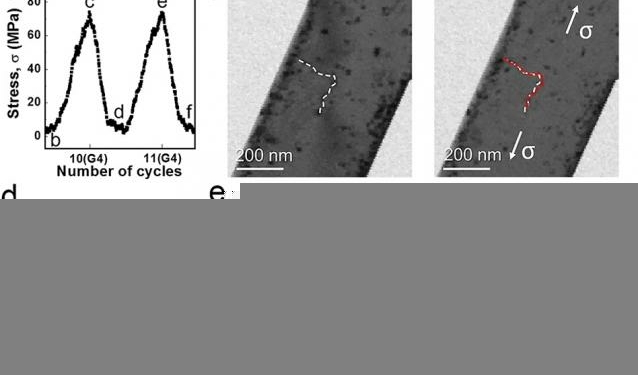 This image shows abrupt de-pinning and de-stabilization of a line defect due to repeated cyclic loading. Figure (a) shows the evolution of nominal tensile stress during two loading and unloading cycles. Figures (b) to (f) are still frames from a video that correspond to the stress state marked in (a), where the white dashed lines indicate the original defect location, and the colored dashed lines represent the altered locations from cyclic loading. The direction of tensile stretching is indicated by the arrows in figures (c) and (e). Image: Zhangjie Wang, Zhiwei Shan, Ming Dao, and Subra Suresh

It’s a well-known characteristic of metals that repeated bending in the same place can cause the material to weaken and eventually break; this phenomenon, known as metal fatigue, can cause serious damage to metal components subjected to repeated stress.

But now, researchers from MIT, Carnegie Mellon University, Xi’an Jiaotong University, and elsewhere have found that under certain conditions, repeated slight stretching of nanoscale metal pieces can actually strengthen a material by eliminating defects in its crystalline structure.

The new finding is reported this week in the Proceedings of the National Academy of Sciences, in a paper co-authored by MIT’s Ming Dao and Ju Li, Subra Suresh of Carnegie Mellon, Zhiwei Shan of Xi’an Jiaotong University, and others in China and at Johns Hopkins University. They refer to the new process as “cyclic healing.”

“While metal fatigue has been studied extensively at larger volumes of materials, there has been little understanding of it at atomic scale,” says Dao, a principal research scientist in MIT’s Department of Materials Science and Engineering. To remedy that, the team decided to study the fatigue of metal using a transmission electron microscope to observe atomic-scale changes in defects.

The team primarily studied what happens in small, single-crystal pieces of aluminum. They aimed to reduce or eliminate microstructural imperfections — such as defects in the crystal lattice known as “dislocations” — through repeated, small-amplitude, cyclic deformation, rather than heat-based annealing.

The researchers found that repeated small displacements of the metal tend to dislodge the dislocations from their pinned locations inside the crystal. The small crystal has a high surface to volume ratio, so the dislocations are attracted to the surface — and the energy stored in the metal due to the presence of the defects could be reduced. “Eventually, these defects can be driven all the way out to the surface,” Dao says.

By “shaking” the dislocations gently and repeatedly, the researchers were able to get the material relatively free of them; consequently, the material’s strength increased significantly. This phenomenon is counterintuitive, because it is the opposite of what one sees in much larger metal crystals, where repeated stretching often increases defect density and causes cracks to form.

The process could help in the production of strong parts for nanotechnology applications, such as mechanical nanosensors, nanoelectromechanical systems, and nanorobots.

“This work demonstrates how cyclic deformation, under certain controlled conditions, can lead to the removal of defects from crystals of small volume,” says Suresh, Carnegie Mellon’s president and a professor emeritus of materials science and engineering and former dean of engineering at MIT. “In addition to pointing out how these mechanisms of cyclic deformation can be very different from those seen in larger-volume materials, this work also offers new avenues for eliminating defects from crystals without the need for thermal treatment or shape change.”

Julia Greer, a professor of materials science, mechanics, and medical engineering at Caltech who was not involved in this work, says while the basic underlying phenomenon of removing defects through deformation was already known, “What’s new here is that the authors demonstrated that you can elicit this phenomenon by conducting cyclical deformation, which does not plastically change the shape of the metal yet eliminates the defects, and hence requires greater applied forces to deform/fail it. So in the end you get a more pristine metal, which contains virtually no defects, and because of it is very strong.”

The research was supported by the National Science Foundation, the 973 Programs of China, the U.S. Department of Energy, and the Singapore-MIT Alliance for Research and Technology.