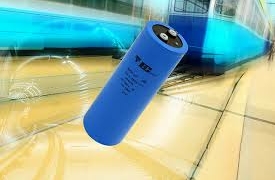 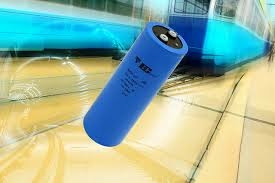 Traction application capacitors are mainly based on plastic film or aluminum electrolytic technology. There are several types of capacitors, each with its own set of benefits and drawbacks. To accelerate and decelerate smoothly, the electric motors of trains require properly controlled power. The most common method in use today is an inverter, a power electronics circuit that switches current on and off in intervals of one thousandths of a second or less. By changing on and off time for the switches in the inverter, the inverter can easily control the amount of power to the electric motors of the train. For example, 100 percent of the time on means maximum power, and 50 percent means half the power. The advantage of using an inverter is that train engineers can control the power needed to drive a train without generating a lot of heat, an issue that was prevalent with traditional systems that used resistor banks to dissipate the power not used by the motors.

One of the challenges that engineers developing inverters face is that long power lines, such as the overhead contact wire in regional train systems, cannot handle quick changes in the current flowing through them, which is exactly what an inverter does to control the power to the electric motors. The solution is to use a capacitor to store electrical current. Under this approach, if the inverter switches the current off, all electric current flows in the capacitor. If the inverter switches the current on, the current is supplied by the power line and the capacitor. With a properly dimensioned capacitor, the current in the power line is the average current needed by the electrical motors at that moment, which does not change very quickly. The current in the capacitor is the difference between this slow-changing average current and the on/off current caused by the inverter. This is also known as “ripple current.”

The key selection criterion for the aluminum capacitor is the needed ripple current, which corresponds to the 8 kHz to 20 kHz high-frequency ripple currents generated by the inverter.

It is advisable to specify a minimum required capacitance to ensure stable operation of the drive. A low inductance (ESL) also improves the filtering of switching noise. ESL values below 13 nH can be reached for screw-terminal devices in large case sizes.

Both series and parallel connections are commonly used with aluminum capacitors, as the voltages in rolling stock may well reach up to 1200 V. In such cases, three aluminum capacitors can be used in series. Care should be taken to balance the intermediate voltage between the capacitors, usually with so-called bleeder resistors.