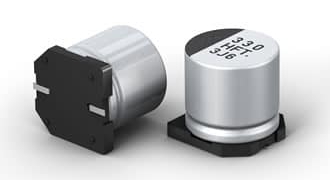 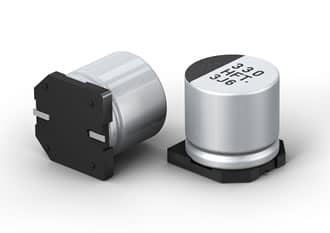 Aluminium electrolytic capacitors are often described as ‘wet’ because the electrolyte is liquid. A typical device would be two pieces of aluminium foil, one coated in an insulating oxide layer, rolled tightly together, with a paper spacer soaked in the electrolyte between the two pieces of foil. The whole assembly is encased in a watertight can to prevent leaking.

The aluminium oxide layer on the surface of the anode foil can be manufactured very thinly, and this allows a relatively high capacitance in a small volume. These devices are also able to withstand high voltages, up to 50V even for surface mount parts, and are economical, because no expensive or rare materials are required for construction.

Although the technology isn’t new, wet electrolytic capacitors are still popular in power electronics for decoupling (especially bulk decoupling) and buffering applications because they are the cheapest option for high capacitance and voltage and can withstand low energy transients. Wet electrolytics come in a wide range of capacitance values, roughly between 10 and 7500µF, with many product ranges available from a multitude of manufacturers that specialise in aspects of performance, such as lower equivalent series resistance, high voltage, high ripple etc.

Wet aluminium capacitors’ major Achilles heel is their limited lifetime. The evaporation of the liquid electrolyte is the main cause of failure, which is exacerbated at elevated operating temperatures. The well-known rule of thumb is that the operating life of a wet electrolytic doubles if the temperature can be reduced by 10°C. Exposure to ripple currents also drastically reduces the lifetime, mainly because the temperature inside the device is increased as a result.

In extreme cases, the application of overvoltage can cause a wet electrolytic to explode, although modern devices have safety vents to prevent gases building up inside the can. Another downside is the devices’ increase in ESR when exposed to low temperatures (below 0°C).

Replacing the wet electrolyte led to the development of polymer aluminium wound capacitors in the 1990s. Construction is similar to wet electrolytic capacitors, with two layers of aluminium foil and a layer of aluminium oxide on the anode, but the spacer between them contains a solid conductive polymer material, which improves performance in a number of areas.

The equivalent series resistance of polymer aluminium capacitors is very low compared to wet types and it’s more stable over a wider range of temperatures and voltages. As an example, ESR is down to 5mΩ for some devices in the Panasonic OS-CON range. This has the knock on effect of better frequency characteristics and resistance to ripple current, compared to wet types, making them ideal for noise reduction over a wide range of frequencies. Furthermore, because the electrolyte isn’t liquid, it doesn’t evaporate, so their lifetimes are improved too.

In addition they offer high capacitance values, though not quite as high as their wet cousins, and can withstand high voltages. However, this performance increase does carry a price premium. Polymer aluminium wound capacitors are often used for decoupling, because of their good frequency characteristics, or as smoothing capacitors in power supplies, due to their ripple capability.

To illustrate, let’s take a closer look at some example devices. A typical 47µF wet aluminium capacitor from the Panasonic FC-V series has a rated voltage of 6.3VDC and the height is 5.4mm with a 5mm diameter. A polymer OS-CON device from the SVPA series with the same capacitance, rated voltage and diameter is slightly higher at 5.9mm. The wet device will last 1000 hours at 105°C, while the polymer device will last 2000 hours under the same conditions. The wet device has an ESR of 1.80Ω and can withstand a ripple current of 95mA (rms), while the polymer device’s is 30mΩ – a sixth of that of the wet device – and can withstand an impressive 1970mA (rms) ripple current. However, the polymer device suffers on DC leakage current; its leakage is 300µA after 2 minutes. The wet device offers leakage current of 3µA at rated voltage after the same period.

As another example, let’s consider a 680µF device from the same Panasonic FC-V series of wet aluminium capacitors. It has a rated voltage of 16VDC, whereas a similar device from the SVPA series of OS-CON polymer wound aluminium capacitors is rated at 4VDC. Both devices are 10mm diameter, but the polymer has a height of 7.9mm compared to 10.2mm for the wet device. The polymer device wins on ripple current (4130mA (rms) compared to 670mA (rms)), ESR (20mΩ compared to 160mΩ) and lifetime (2000 hours compared to 1000 hours at 105°C). However, the wet device retains its lead in leakage current performance, at only 109µA compared to the polymer capacitor’s 544µA after 2 minutes.