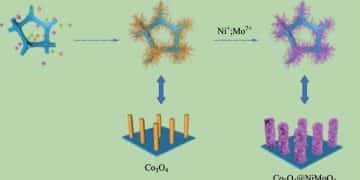 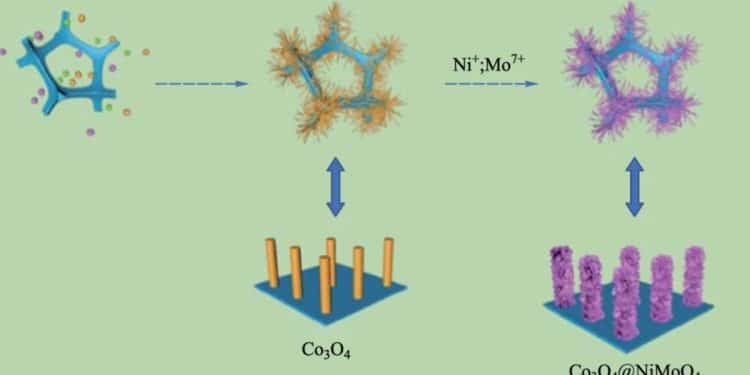 Schematic of the structure of [email protected] composite samples

Co3O4 nanomaterials as electrodes have been studied widely in the past decade due to their unique structural characteristics. However, their performance does not yet reach the level required for practical applications. It is, nevertheless, an effective strategy to synthesize hybrid electrode materials with high energy density.

Herein we prepare Co3O4@NiMoO4 nanowires by a two-step hydrothermal method. The as-obtained sample can be directly used as cathode material of supercapacitors; with specific capacitance of 600 C/g at 1 A/g. An assembled capacitor delivers an energy density of 36.1 Wh/kg at 2700 W/kg, and retains 98.2% of the initial capacity after 8000 cycles.

The shortage of fossil energy resources leads to urgent requirement for the exploration of sustainable energy conversion and storage equipment. Among them, the supercapacitor (SC) is an excellent energy storage device due to high power density and long cycle life. According to energy storage mechanism, SCs can be classified into electrical double-layer capacitors and pseudo-capacitors. The latter type possesses a greater potential than the former in terms of specific capacitance, due to highly reversible redox reactions of electrode materials. However, low energy density restricts their practical application. Therefore, it is extremely important to develop high-performance electrode materials for this type of SCs.

At present, transition metal oxides are considered to be promising candidates for SC electrode materials. However, these traditional cathode materials still show relatively poor conductivity and low specific capacitance. The ternary transition metal oxides show better conductivity than some binary counterparts due to the multiple oxidation valence states. Co-based materials have been used as cathodes for SCs. It is still crucial to tailor their shapes and structures to improve the electrochemical performance by constructing a Co3O4-based hybrid structure.

Herein, we report Co3O4@NiMoO4 nanowire structures grown on porous nickel (Ni) foam via a two-step hydrothermal method. With conductive Ni foam as the skeleton, electrode materials with high capacitance can be obtained. The as-obtained material delivers a capacity of 600 C/g at 1 A/g. Asymmetric SCs are assembled, with Co3O4@NiMoO4 as cathode and activated carbon as anode (Co3O4@NiMoO4//AC). The device shows an energy density of 36.1 Wh/kg and long cycle stability.

Ni foam is directly used to grow Co3O4 nanowires due to its 3D conductive porous characteristics. Co3O4 samples and Co3O4@NiMoO4 composite samples are prepared and morphology of the samples were studied with different magnifications using SEM.

The Co3O4 sample presented a wire-like shape and was evenly covered on the Ni foam. The average diameter of nanowires was 20 nm. The morphologies of Co3O4@NiMoO4 composite samples show the NiMoO4 nanosheets coated on the surface of Co3O4 nanowires, forming a core–shell structure as illustrated in the featured top image. The surface of nanosheet becomes obviously rough, four elements of Co, Ni, Mo and O were evenly distributed on the surface of the sample.

Table 1. shows the electrochemical performance of the devices based on different electrode materials. It was found that the Co3O4@NiMoO4//AC device can deliver an energy density of 36.1 Wh/kg at 2700 W/kg, which is higher than those reported in referenced literatures.

In summary, the core–shell Co3O4@NiMoO4 samples were successfully grown on Ni foam by a simple hydrothermal route. The synthesized samples presented an excellent specific capacitance (600 C/g at 1 A/g) and cycle stability.

After 10000 charge–discharge cycle tests, the capacitance retention of the as-prepared composite still reached 98.2%, which shows long-term charging and discharging behavior.

The as-assembled ASC delivered superior electrochemical performance with an energy density of 36.1 Wh/kg at 2700 W/kg and 84.4% initial capacity retention after 10000 cycles.