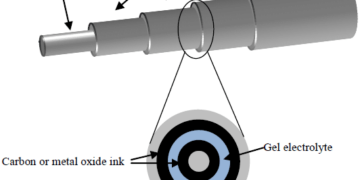 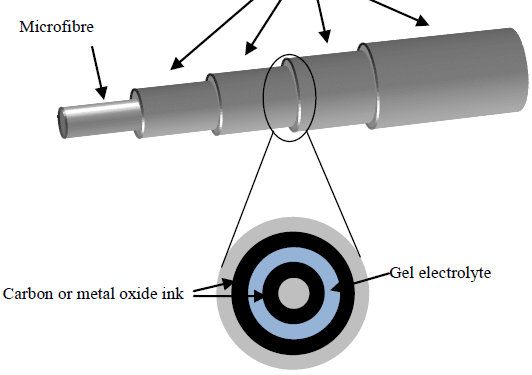 Technology to produce supercapacitor thread capable of being made into cloth has been developed in the lab before but has been unable to generate the voltages needed to power smartphones.

Now Professors David Harrison and John Fyson, Dr Yanmeng Xu, Dr Fulian Qiu and Ruirong Zhang of Brunel’s Department of Design have patented a technique which they claim can produce thread capable of storing and supplying sufficient power for mobiles, and they believe it can be manufactured on a commercial scale.

“Supercapacitors are already ubiquitous as back-up power in phones, PCs and tablets. They store energy without a chemical reaction so can be charged and discharged almost indefinitely. But in thread form they have never before been able to break the 1V barrier.”

“What we have done is show we can produce a multi-layered structure with two sequential capacitive layers capable of producing up to 2V. Breaking the 1V threshold is important as in the real world we work on the voltage of common batteries – 1.5V.”

The research team also wanted to address mass production issues and have developed a process to semi-automatically coat stainless steel wire the thickness of a human hair with eight separate layers.

The work at Brunel is part of the EU-sponsored Powerweave programme which brings together researchers from seven countries to produce textiles which can both generate and store power.