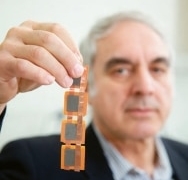 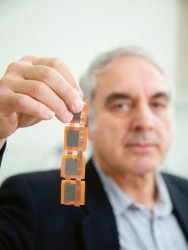 Scientists from London based UltraCap Ltd., are in the final stages of developing a “green” solid state battery for electric vehicles that they claim will be 40 times lighter than current Lithium-Ion batteries. UltraCap founders, Professor Vladimir Krstic and Nico Van Dongen, say their new battery, the UltraCapacitor, will be able to charge within minutes and that, eventually, a pocket sized version of the battery will bring us one step closer to emission-free transportation.

A battery breakthrough
Krstic has already proved that his ceramic battery can contain much more electricity in a smaller size than current chemical based batteries. This is due to a multi-layered capacitator design, containing a ceramic di-electric non-conductor. What happens is a number of these capacitators are daisy-chained together to form a small, lightweight green battery. Using this technology, the release of electricity is not limited by chemical reaction rates, so electric cars can recharge in minutes as opposed to hours. Furthermore, production of this next-generation battery will be cheaper and cleaner, making electric vehicles more affordable in future.

The company is currently developing a prototype that is anticipated to weigh less than 20kg (the Tesla Model S 70kWh battery package weighs 535kg) and deliver five consecutive hours of driving. Once complete, the prototype will be fully tested in an electric car.

Krstic believes the technology can be improved further and that heavy chemical-based batteries will soon become redundant,

“We can make the ceramic dielectric much thinner and lighter without losing electrical capacity and create pocket size car batteries in the near future. The technology has the potential to revolutionize the way electrical energy is stored and transported. Due to high energy density and small size, it will be possible to charge the device in all regions of the world where electricity is abundant and inexpensive and then transport it to urban areas where it is needed the most.”

UltraCap is currently looking for funding to develop the project further.

About Prof Krstic
Krstic is co-founder of UltraCap Investment Ltd and a professor at Queen’s University, Kingston, Canada with a track record in managing government and private sector funded projects for more than 30 years, Dr. Krstic has successfully completed more than 30 different projects funded by various federal and provincial programs, as well as private sector companies. He is also inventor of several new technologies and has authored and co-authored eight patents in the area of advanced functional ceramics.