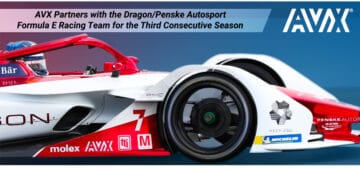 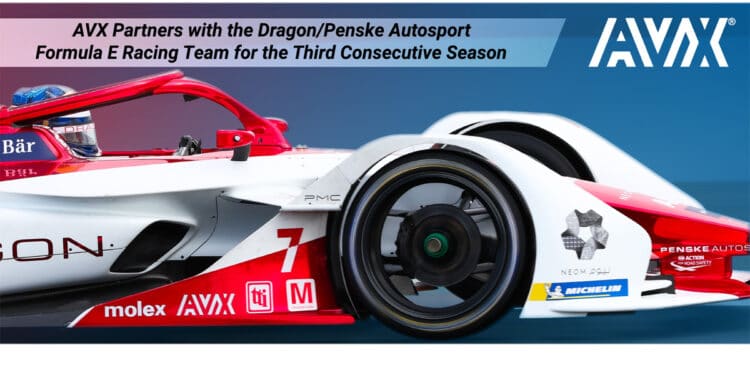 AVX Corporation, a leading manufacturer and supplier of advanced electronic components and interconnect, sensor, control, and antenna solutions, proudly announces its continued support of the newly rebranded DRAGON / PENSKE AUTOSPORT Formula E racing team. The seventh season (2020/21) of the ABB FIA Formula E World Championship is currently scheduled to kick off with a double-header in Diriyah, Saudi Arabia, a UNESCO World Heritage site renowned for its desert landscape, and marks the third consecutive season that AVX has aligned with Mouser Electronics and TTI, Inc. in supporting the all-electric DRAGON racing team. The Diriyah races will also mark the series’ first night races, which will be lit with the latest, lowest-energy-consumption LED technology and exclusively powered by renewable energy sources to maintain the series’ net-zero carbon footprint, and barring any unforeseen circumstances, will take place on Friday and Saturday, February 26 and 27.

The double-header originally scheduled for January 16 and 17 in Santiago, Chile, has been postponed and the new dates for that race, as well as the dates and locations for the rest of the 2020/21 season, will be released later this year. The pre-season test races in Valencia, Spain, spanned three days, five sessions, and some 6,000 laps in late November and early December, and revealed the likelihood of a hotly contested season, with all 24 drivers finishing the fifth, final, and most competitive session within just 0.761 seconds of one another, setting a new record for the tightest spread times in pre-season Formula E test races.

“We’re delighted to be co-sponsoring the DRAGON / PENSKE AUTOSPORT Formula E racing team for another exciting season in partnership with Mouser, TTI, and Molex,” said Alex Schenkel, AVX’s senior vice president of Global Sales. “The ABB FIA Formula E World Championship is an especially thrilling way to promote global environmental sustainability and stewardship and to showcase the latest high-performance automotive EV technologies. It’s also wildly entertaining and interactive, even for viewers watching from home, which we hope will bring some much-needed joy and fast-paced excitement to the millions of fans affected by quarantines, closures, and curfews. We’re all in this together and we’re very grateful for the opportunity to share some good, clean fun with auto racing enthusiasts around the world.”

The ABB FIA Formula E World Championship is the fastest-growing series in motorsport and the first sport with a net-zero carbon footprint since inception. Firmly rooted in three core values: energy, environment, and entertainment, the championship serves as an Apollo-like proving ground, driving the development of innovative EV technologies from the drawing board through to the production line, promoting sustainable human progress, and — through the power of ultra-competitive, unpredictable, and edge-of-your-seat exciting, all-electric racing in the center of the world’s most iconic cities — fueling the adoption of electric vehicles to help counteract climate change.