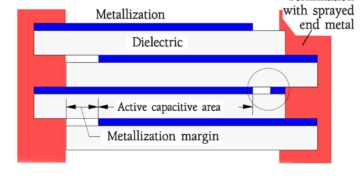 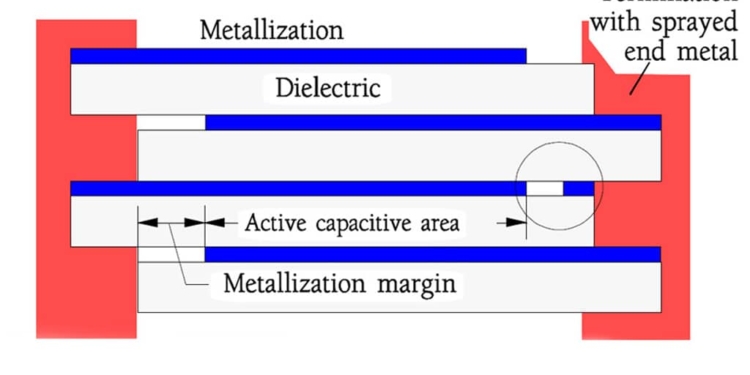 Electrostatic capacitors dominates the market among the other capacitor technologies. The article provides introduction into construction of electrostatic capacitors, such as ceramic, film, paper technologies. Assembly styles, termination techniques or metallization processes are explained including impact to the basic paramters. Specifically described is film capacitors’ self-healing process and how this can be impacted by selection of materials and manufacturing process.

Lets start with a general consideration of electrostatic capacitor designs. There are some design solutions and “tricks” to reinforce capacitor features to meet specific application requirements such as higher power, higher safety robustness.

Dielectrics always have weak spots or defects and thinner zones which are more sensitive to breakdowns than the ordinary material. A breakdown, i.e. a short circuit through the dielectric, leads to local energy generation which transforms the material in the breakthrough canal into a plasma and vaporizes the thin metallization around the breakthrough hole. Around this hole with a diameter of 5…100 μm (0.2…4 mils) there is created a metal-free insulation area approximately 0.1 to 3 mm (4 to 120 mils) in diameter. The instantaneous short circuit thus is turned into an open circuit. The phenomenon is called self-healing (Figure 9). The condition for self-healing is a certain minimum energy estimated to be at least 10 μJ. Small part capacitances or low working voltages, therefore, may lead to a lack of self-healing if a breakthrough nevertheless should occur in a weak spot, e.g. under extreme heat when the dielectric has grown weaker.

As indicated in Figure 9. the self-healing energy creates a plasma. Its temperature and pressure are extremely high but with short duration. The gas pressure developed around the breakthrough site propagates and separates the adjacent dielectric layers to an extent while the decomposition products are spread over the surrounding metallization and plasma pressure and temperature drop. The whole series of events for typical energies occurs within 0.01 to 1 μs. Electrically, the event manifests itself in an abrupt voltage drop which is restored as a charging curve, usually within 100 μs. The time constant is determined by RC product of the immediate external circuit. It’s a rare occasion that the whole existing energy is used for the self-healing. The voltage drop usually don’t get any further than

The self-healing design permits lower safety margins between the breakdown voltage and the rated. A short circuit doesn’t have to be avoided at any price. The ratio of breakdown voltage to rated voltage can be decreased from (10…15):1 to (3…6):1 which reduces the thickness of the dielectric foils correspondingly.

Resulting effects of a self-healing

During self-healing the polymeric dielectric is decomposed. Carbon-rich compounds generate amorphous carbon which will be deposited on cavity walls and, unfortunately, also on the insulated burned off surfaces around the breakthrough hole and its canal walls (Figure 10.).

Compounds very rich in carbon, such as polystyrene, generate so much carbon that they are impossible to use in a customarily metallized design. The carbon deposits destroy the IR after a self-healing.

Other materials have a varying degree of carbon generation (Table 1). That information, however, must be combined with information on the clearing chemistry of the materials. Best is PP followed by PET and the poorer PPS and PEN.

Even if the deposited graphite does not destroy the IR, sometimes graphite particles under the influence of weak field strengths line up to form conductive strings with an unstable resistance in the range of some hundreds to some hundred kΩ. In practice this is a short circuit. If the voltage is raised or the circuit impedance doesn’t limit the current the conductive carbon string is burnt off. We never experience the phenomenon in practice because the required energy is much smaller than that of a self-healing. If the application, however, is critical and works in high impedance circuits at temporarily low field strengths the short circuit doesn’t disappear. Hence, certain dielectrics in film capacitors should be avoided if we don’t purchase capacitors after they have passed extensive burn-in and powered thermal cycling testing.

The risk of this type of carbon deposits increases with the internal pressure of the winding. Precision capacitors are, for example, wound on a core with a relatively high tensile stress which gives a dense and mechanically stable winding. The following figure shows schematically the approximate internal pressure distribution in some different winding types.

In severe cases the winding pressure may approach 100 bars (» 1450 psi). But the internal pressure prevents the plasma from expanding with the consequence that the carbon deposit is concentrated at the immediate breakdown site. This in turn increases the risk of  ”carbon string” short circuits. Furthermore, the risk of damage to neighboring dielectric layers increases if the developed energy corresponds to high working voltages (Figure 12.).

In the most severe case self-healing under these conditions results in a thermal run-away where the capacitor is destroyed and may burn.

Resistors for EVs and Automotive