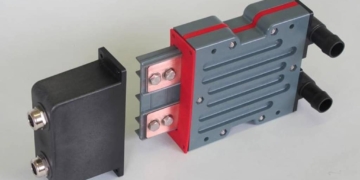 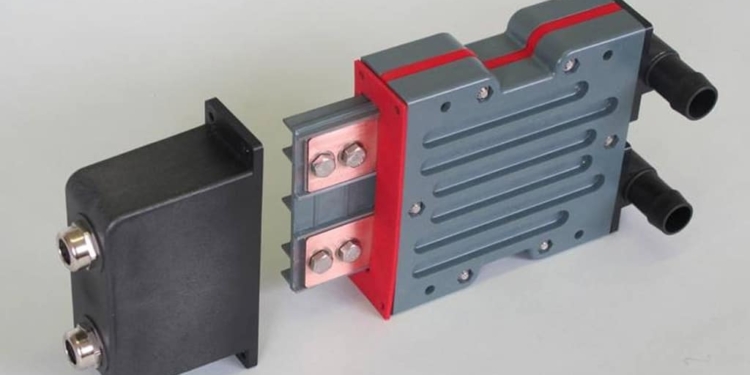 In motor driven applications like cranes, lifts, hoists and conveyors, air cooled resistors are common, but in medium voltage, high power applications liquid cooling wins out. A medium voltage drive running off a 3.3kV supply to turn a 500kW motor will put a severe heating load on the application’s power transistors – hence the need for water cooling, as David Atkins, projects director at Cressall Resistors explains.

In marine applications, for instance, the drive is typically located in the bowels of a vessel, which makes heat dissipation a problem. Because of this, ships and oil rigs usually have chilled water systems with a single heat exchanger – a more efficient way of getting heat out from the vessel, compared to ducting warm air everywhere.

If 1MW or more of heat needs to be dissipated, direct water cooling makes more sense. A typical 1MW fresh water-cooled brake resistor for marine use is basically a 10 foot tube with large heating elements similar to those found in common household kettles. The braking electricity that is being regenerated powers these elements. Most ships have a chilled water system, which circulates cool water throughout the vessel, used for both air conditioning and equipment cooling.

Over the last ten years shaft-driven shipboard mechanical power transmission has been increasingly replaced by electrical power. For example, both the Royal Navy Type 45 destroyer and the Queen Elizabeth carrier are electrically driven. The prime mover is used solely for generating electricity, which is then distributed to various motors, including those driving the propeller shaft(s), and other consumer loads.

The logic behind all-electric ship design that is two-fold. Firstly, ship layout – a large motor does not need to be in the middle of the ship, which is better used as prime passenger and cargo space. Secondly – energy efficiency. Traditional ships could have up to four diesel engines located mid-ship running at low power under normal operating circumstances. This often made them inefficient. By using smaller diesel engines together with a couple of gas turbines, the right number of prime movers can be fired up to suit power demand, whether it is a fully-laden oil tanker afloat at sea or stationary at port.

In drilling or cable-laying vessels, where anything up to a mile of cable has to be paid out over the side during passage, the weight of the cable is so massive, that the drive motor has to reverse its function from motor to generator, in order to brake the cable reel. Air cooled resistors have heating elements enclosed within a fan cooled cabinet. This makes them suitable for deck mounting, often on anti-vibration mounts.

When most people think of a resistor, they see little components used in electronic equipment. However, a resistor is essentially a way of turning electric energy into heat energy. The latter can be easily wasted if it is not wanted at the location where it is produced.

This brings us back to the reason why a 500kW drive is typically supplied from a medium voltage 3.3kV supply instead of the usual low voltage 415V. Transmitting power at low voltage increases current – as formulated by Ohm’s law. The thickness of the copper therefore has to be increased to cope with the extra current. This is one of the reasons why power transmission over long distances is typically at high voltage 400kV – to reduce current and consequently, cable thickness.

Cressall’s EV2 advanced water cooled modular resistor range for low and medium voltage applications is especially designed to function in severe environments, like the ones marine systems have to function in. This patented design encapsulates and completely separates the resistor elements from the coolant.

An important benefit from using an electric drive is that reliable systems of regenerative and dynamic braking are available to complement or replace traditional mechanical braking systems. The advantages of electric braking include control, reliability, mechanical simplicity, weight saving and, in certain cases, the opportunity to make use of the regenerated braking energy.