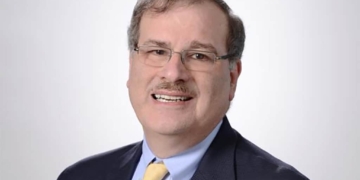 KEMET Electronics Corp. (Fort Lauderdale, Florida) – now known as a world-leading manufacturer of passive components – is celebrating 100 years since its formation as a subsidiary of Union Carbide. eeNews Europe caught up with the company’s CTO Philip Lessner to offer congratulations.

Lessner explained that the father of the 100-year old company was a gifted chemist from Cleveland, Ohio – Hugh Cooper – who, while working in his garage in 1916, developed an alloy of beryllium and aluminum that proved useful in the manufacture of vacuum tubes. The alloy – which he called Cooperite – displays high thermal conductivity, light weight and high-strength and its use helped extend the life of vacuum tubes and drive an electronic revolution.

In 1919, he sold his patents to Union Carbide Corp, which formed KEMET (CHEmical-METallurgical) Laboratories with Cooper as its director. From that starting point the company also got into the chemistry of “gettering” to complete and maintain the vacuum in those tubes.

From that small beginning the company has grown to be one with 16,000 employees, 24 manufacturing locations and annual revenues of more than $1.3 billion. Kemet offers a broad range of tantalum, ceramic, film and electrolytic capacitors and has branched out into sensing, actuators, magnetic components and packaging technologies.

However, the first half of Kemet’s history was as a materials company driven by the growth of vacuum tube electronics. Then in 1947 came the invention of the transistor and it quickly became clear that vacuum tube use would decline as transistor use increased and that Kemet needed to add other strings to its bow. In the mid-1950s the company decided to enter the tantalum capacitor business which it did commercially in 1958; followed by multilayer ceramic capacitors (MLCCs) in the 1960s. This fuelled Kemet’s growth through to the 1980s.

In 1988 management bought out KEMET from Union Carbide and followed up by taking the company public in 1992. Since the turn of the millennium KEMET has grown organically and by a series of acquisitions including such well-known names as Arcotronics, Evox-RIFA and most recently NEC-Tokin, said Lessner.

“The other lesson we learned in the 1990s was that significance in the home North American market was not enough. We needed to be significant in Europe, which is why we made some of those acquisitions. We now make film capacitors in Italy, Macedonia, Finland and Bulgaria. We make electrolytic capacitors in Portugal and Sweden.”

For the Asian part of the story KEMET had licensed some technology from NEC. This led to a joint venture with NEC-Tokin that existed from 2012 to 2017. At that point KEMET took 100 percent ownership and created Tokin Corp. as a wholly-owned subsidiary. “This brought us into the area of magnetics, chokes and piezoelectric actuators, with factories in Japan, Vietnam and China,” said Lessner.

“We are all things passive and we are looking for expansion opportunities, this includes value-added modules which can include active components. We continue to use innovation in metallurgy and chemistry; for example, in automotive electronics where hardening components for harsh environments is non-trivial; providing corrosion resisitance and longer life times.:”

Lessner acknowledged that this module approach increasingly takes KEMET into packaging considerations but said there is still progress to be made with basic materials. “In MLCC we haven’t reached the fundamental limit. The company has recently introduced three new dielectric materials one of which – U2J – offers a threefold improvement in dielectric constant,” said Lessner.

In terms of capacitor research another promising area is the use of carbon nanotubes, Lessner said. “We have also developed a novel magnetic material we call nanomet. This is a nanocrystaline material that has the advantage over metal-flake composite materials of a higher saturation current.” Lessner said KEMET is developing a series of inductors with enhanced specifications around this material.

Lessner said that while there is scope to improve passive performance, many components are already so small as to be at the limit of pick-and-place assembly operations, which limits the scope for miniaturization and cost savings. Hence, there is a demand to incorporate passives into the printed circuit boards that connect and physically support complex active components. “We’re working with a major PCB manufacturer on embedded magnetics and inductor and capacitor materials. We’ve developed a dc/dc converter module where the capacitors and magnetics are embedded in the board.”

One thing that is changing is that passive makers, like IC makers before them, are having to cooperate further up the supply chain and gain application knowledge, said Lessner. “Through most of our history we were a seller of generic building blocks. We now need to work closely with the OEMs and the board manufacturers. That can mean working on automotive inverters for different tier-one suppliers and each one ends up being a unique design. There’s definitely been an application-specific trend over the last 15years,” he said.

Lessner characterized KEMET’s sales by sector as being roughly: 15 percent automotive; 10 percent aerospace, defense and medical; 20 percent computer; 35 percent industrial including solar and wind; with the balancing 20 percent covering all other sectors including consumer and telecommunication. Similarly, the company is balanced in terms of geography, he said, with thirds of the revenue coming from the Americas, from Europe and from Asia.

KEMET is currently a well-balanced operation that will be able to survive any coming downturn and even prosper by way of the opportunity downturn may represent, Lessner asserted.

“I don’t think consolidation is played out and we will continue to look for opportunities. Things are probably a little overpriced right now so a slowdown might bring prices down. We are bullish in the long term. There is the electrification of the automobile and the roll-out of 5G and we have the products to serve those trends. We have the technology for the integration of passives into modules and then into circuits boards.”

In short, the future looks good for a balanced global supplier of passive components and passive component technologies. It is impossible to know for sure what the next five years will bring, let alone the next 100 years, but one thing KEMET has demonstrated – twenty years before David Packard and Bill Hewlett – is that great companies can grow from a tiny start in a garage.