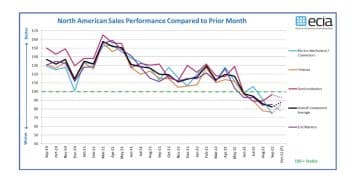 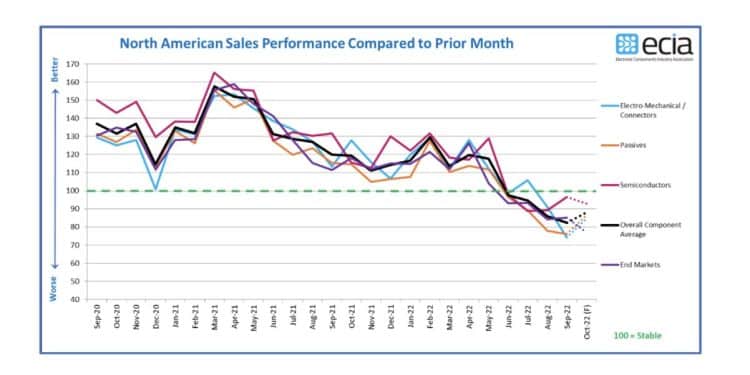 Continuing a decline that started in May 2022, the Electronic Component Sales Trend index dropped again as it fell from 86.0 in August to 82.3 in the September measurement.

However, the results varied widely by product segment. Electro-Mechanical components saw a steep decline as it fell by 16.7 points in September while the Semiconductor index improved by 7.2 points. Passive components were fairly stable with a dip of 1.7 points. Measurements below the benchmark level of 100 indicate negative sales growth sentiment.

The October outlook provides some hope in the near-term as the overall index is expected to rebound by 5.7 points. This is driven by strong rebounds projected for Electro-Mechanical and Passive Components of 10+ points. Semiconductors are expected to lose half of their September gains and fall by 3.6 points in October. While encouraging, the October index still reaches only 88.0 which leaves it solidly in the category of declining market growth.

The End Market index remained fairly stable between August and September as it improved slightly by 0.9 points. But it moves in the opposite direction of the component markets in the October expectation as it falls to 77.0. The difference between the Component and End-Market Indices is likely explained by the different component product mix between different end-markets. Bottom line – the electronics component markets are showing extended weakness with the best hope being that they do not weaken further.

A range of economic indicators reflect increasing concerns with a growing number of bank executives and financial analysts sharing pessimistic sentiment moving forward into 2023. Regarding electronic components, the normal cyclical behavior of the market is aligned with the economic outlook. After a robust period of growth, the market is clearly on the back side of the cycle. At this point, it is not a question of whether the markets will weaken but how deep and how fast the markets will decline. Some industry analysts are calling for a “crash” scenario. However, that sentiment is not unanimous. Several industry executives see the greater electronic market diversification enabling a softer slide.

The end market indices reported a broad-based improvement in September with notable rebounds in Automotive, Mobile Phones, Telecom Networks and Medical Electronics. Automotive and Medical Electronics achieved measures above 100 again while Military/Aerospace sustained its strong measure at nearly 117. Unfortunately, most of these gains are lost in the October outlook with only Military/Aerospace and Automotive remaining at or above 100. Consumer Electronics continued its steep decline in September but stabilizes well below all other markets in October. The near-term
expectations for all market segments, except as noted above, are for continued weak sales extending at least through October.

The combination of improved supply chain conditions and weak trending sales continues to benefit the lead time picture significantly. The percentage of survey participants seeing increased lead times in the Passive Components segments improved significantly in September. Semiconductor saw a slight improvement in the measurement of increasing lead times while Electro-Mechanical lost ground. All three component segments saw a healthy increase in those seeing declining lead times. The lead time picture is the most positive aspect of the most recent ECST report.