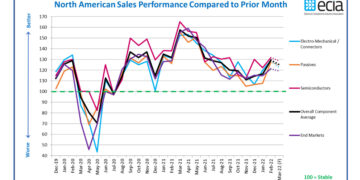 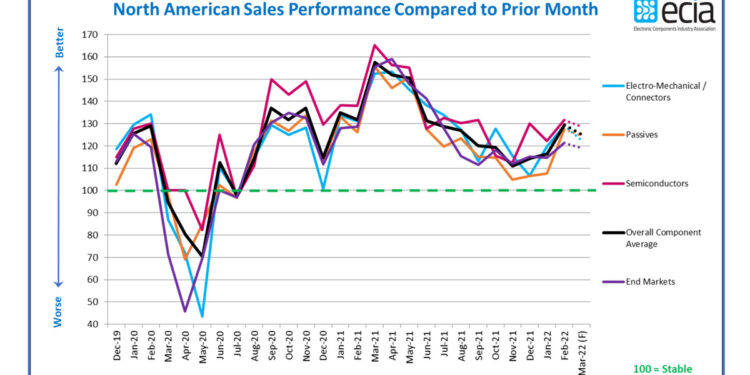 The results of the February 2022 Electronic Component Sales Trend Survey (ECST) reported by ECIA delivered a positive upside from expectations measured in the January Survey.

Actual overall sales sentiment for February registered at 129.4, outperforming expectations by 16.3 points. In an indication of the strength currently
seen by the supply chain, the index only dips slightly down to 125.2 in the outlook for March. The results for both months is a very encouraging indicator of resilience and stability in the electronics component markets.

The optimism is uniform across all major component categories with only four points separating semiconductors on the high end and Electro-Mechanical Components on the low end in both months. Inductors saw a major jump in positive sentiment as it surpassed even Discrete Semiconductors which had been an index leader recently. In addition to Inductors and Discrete Semiconductors, Analog/Linear ICs and Connectors also score notably higher than other subcategories.

Every component subcategory except one achieved a score of at least 125.0. Only Resistors came in below that level at just under 118. The strength of the market sentiment in the first three months of 2022 shows solid momentum to start the year. The end-market index continues to follow closely the general trend of the component index. In recent months the average end-market scores have come in slightly lower than the component index. February’s end-market score came in at 121.3.

The difference is likely due to all market categories being weighed the same in calculating the average whereas the demand for components varies by end-market. The robust component sales sentiment in the index continues a strong pattern as it has now registered above 100 for 19 straight months dating back to August 2020. A comparison between the three groups surveyed shows a dramatic shift in sentiment among Manufacturers.

Compared to their pessimistic expectations for February, their sentiment for actual February performance came in at the top of all three groups. This time the Distributors were the most conservative in their report of sentiment for February. However, less than six points separated the Manufacturers at the top and the Distributors at the bottom. All three groups see a slight dip in expectations for March. But all still score above 123 in the coming month.

The continued strength of sentiment is impressive considering the continued supply chain challenges as well as economic concerns. The war on Ukraine by Russia had not commenced by the end of the survey so the potential impact from that major world development is not captured in this
survey.

The results of the Quarterly ECST present a strong positive picture for both Q1 and Q2 2022. The overall average of the total number of respondents expecting growth in Q1 2022 is 64% and only dips slightly to 62% in Q2. However, the mix of expectations for growth in the different tiers shows a shift to lower growth expectations in Q2 compared to Q1. Bottom line is that there is solid expectation for growth through the first half of 2022 with growth slowing in the later months.

As anticipated in the January survey, Mobile Phones, Computers, and Consumer Electronics registered weak sales sentiment scores of 100 or less in February. However, in the outlook for March, even these markets see measurable improvement with scores solidly above 100. Softness in these areas early in the year reflects a typical seasonal pattern for these markets.

Concerns related to the economy have not changed from the last report as inflationary pressures continue to increase and consumer confidence takes a strong hit. The most recent purchasing manager index reports still show optimism for growth. But the overall economic picture still leaves room for concern. The Lehigh University “Supply Chain Risk Index” placed “Economic Concerns” at the top of the list of potential supply chain risks ahead of “Transportation Disruption Risk” in Q1 2022. “Cybersecurity and Data Risks” also saw a big jump in the latest index. Certainly, this concern will only be exacerbated by the potential for hostile Russian activity in this realm. With no end in sight to elevated supply chain challenges, manufacturers and retailers continue to face an extremely risky and uncertain future. Common projections for resolving the major supply chain challenges still stretch out into early to mid-2023.

Lead time data reported by ECIA through January seemed to point to a peak in lead times in December and January for all Semiconductor categories and many Passive categories. Unfortunately, the latest ECST survey results see a jump in increased lead time expectations in February. This is a reversal in trend from what had been seen in the survey over the last few months. It is hoped that this will only be a temporary increase and lead times can be brought under control in the near future.