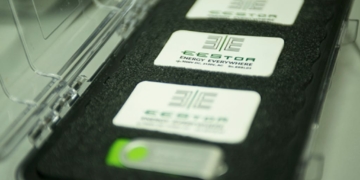 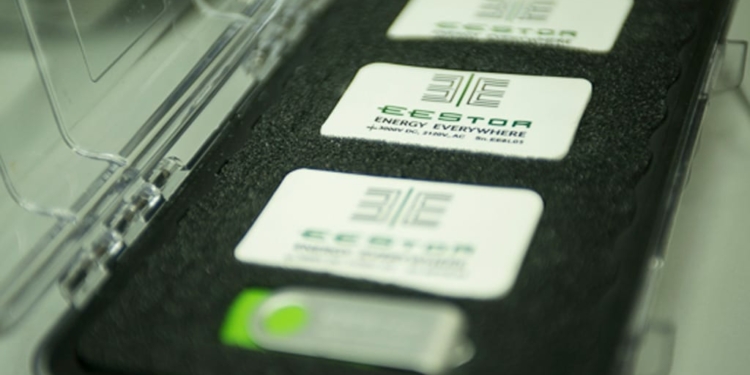 (Toronto, Ontario/Austin, Texas, May 11, 2018) — EEStor Corporation (TSXV:ESU) (“EEStor” or the “Company”) has developed a hybrid capacitor dielectric material (glass-CMBT) that is shown in independent third party testing to provide higher permittivity at a significantly reduced cost to existing capacitor technologies, and is anticipated to benefit the US$2.3 billion plastic film capacitor industry. Licensees of the technology would have access to these proprietary materials to manufacture capacitors for the next generation infrastructure, power supply, propulsion, wind, solar, wave and geothermal energy markets. Market Research Future projects the global film capacitor market to increase to US$2.7 billion by 2023.

Ceramic capacitors produced using EEStor materials have the same capacitance as commercially available plastic film capacitors, yet are up to 92 percent smaller. A reduction in size translates to a reduction in cost as less raw material is required for manufacturing and ceramic dielectric materials are less expensive than metallized plastic film to produce. Independent testing found that material costs were up to 1,195% more for commercial film capacitors than for the EEStor CMBT-glass capacitors.[1]

According to EEStor Founder and CEO Ian Clifford, “We expect the development of this new dielectric material to revolutionize the pricing structure of the green energy market and give licensees of our technology a significant competitive advantage in producing materials for the emerging high-tech economy.”

Film capacitors are used in power grid distribution systems, the green energy sector in solar, wind, and wave energy generation systems, and in electric and hybrid vehicles. EEStor has published a Market Report outlining the key benefits of its technology in these emerging renewable markets.

EEStor is in the process of establishing licensee relationships to pursue multiple vertical market opportunities. Licensees will gain access to EEStor’s intellectual property for the purpose of designing and building commercial capacitors using EEStor’s patented CMBT dielectrics and its associated manufacturing and assembly know-how and expertise.

EEStor is a developer of high energy density solid-state capacitor technology utilizing the Company’s patented Composition Modified Barium Titanate (CMBT) material. The Company is focused on licensing opportunities for its technology across a broad spectrum of industries and applications.

The Company’s success depends on the commercialization of its technology. There is no assurance that EEStor will be successful in the completion of the various enhancement phases underway to warrant the anticipated licensing opportunities in the technology. Readers are directed to the “Risk Factors” disclosed in the Company’s public filings.