European passive component market development until 2016 has been just released by EPCI newsletter. In 2014 the European Passives Components market increased to a volume of EUR 4.3 bn and could continue the healthy development in the following years 2015 and 2016 with a steady growth of 4.4% and 4.9% to a total of EUR 4.8 bn in 2016.

Inductors represent the second biggest product segment among Passive Components in the EMEA market with a share of more than 20%. In the last two years the Inductors market has grown the most with a CAGR of 7.5% and reached a size of EUR 1.1 bn in 2016.

The combined market of RF Components, Piezo Ceramics and EMC Filters totaled EUR 1.0 bn in 2016. It showed a moderate but steady annual growth of 2.8% on average from 2014 to 2016.

Main European Market Segments
The Automotive sector represents half of the total Passives EMEA market. Hence, strong growth – as in the last two years – is of highest importance for Passive Components in Europe.

The Industrial segment as the second largest in the EMEA market and with a share of one third is of major importance, too. Here, the market development was also positive from 2014 to 2016 with moderate growth rates. 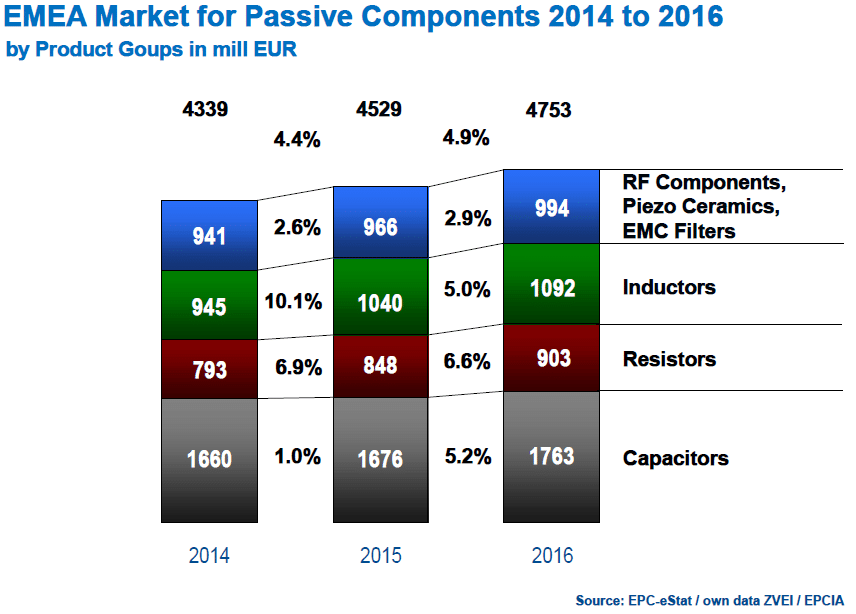