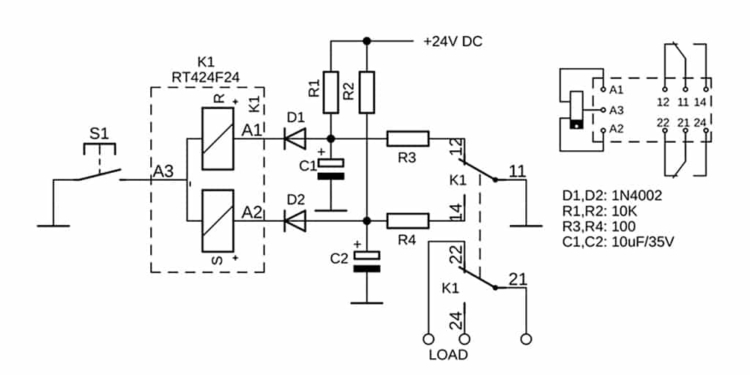 by Marek Irek, Technical Manager at the Relcon Polska. This circuit uses two electromechanical relays to realize a sequential switch that’s permanently resistant to electrical disturbance, remembering its state despite power failure and consuming energy only when it’s switched from one state to the other.

I know, I know—discussing the subject of a relay-based sequence switch in the age of omnipresent microprocessors seems to be a waste of time. After all, relays have been in use for many years. Is it possible to create something new from these already well-known relays? I tried many years ago, and I think that I succeeded.

I admit that this project is late by about 70 years, but I think its clarity of structure and operation deserves some attention. The first thing that makes it stand out is the fact that despite executing the function of a logic circuit, it does not use active electronic elements. In addition, despite the simple structure, it possesses features of much more complex digital systems.

The sequence switch, built on two-coil bi-stable relays, is partially a development of the article “Relay-Based ON/OFF Flip-Flop Remembers State During Power Failure.” In that Idea for Design article, the author, Tommy Tyler, presented a relay-based flip-flop circuit, the trigger concept of which is quite similar to my idea submitted to the Polish Patent Office over 20 years ago (Featured image Fig. 1 above).

This design was created due to the need for an effective current switch triggered by a pulse that remembers the state during a supply failure and is permanently resistant to disruptions. The main idea was to use the fact that coils of bi-stable relay at rest do not require a power supply, allowing for the accumulation of an electric charge that can switch the relay.

Because accumulated charge should have an appropriate polarization and alternately power the relay coils, I’ve used one pole of relay contacts as a switching key. It allows current to flow unidirectionally through the excited coil and block for the duration of pulse triggering of the passive coil. Despite the fact that the same control pulse is provided to both coils, only one of them is able to create an electromagnetic field thanks to this configuration, enabling the relay contacts to switch into position opposite to the currently occupied one.

When mobile contacts will be transferred into the other stable position by the charge flowing through chosen coil, the low potential present on the central connect—mutual for both coil—prevents the accumulation of charge necessary to power the other coil until the input is opened. Even its temporary opening allows for an accumulation of charge sufficient to trigger it at the moment the control pulse reappears.

Triggering coils in such a way makes it possible to build a bi-stable flip-flop trigger or one based on two such latches like the sequence switch in Figure 2. The flip-flop circuit built according to the idea described above (Fig. 1, again) during standby mode consumes a current of several milliamps, which in certain circumstances can be considered as a disadvantage.

2. This simple, pulse-controlled system of two dual-coil bi-stable relays performs the function of a sequential switch. A unique feature of the switch is that it performs without active electronics components, remembers the state during power failure, is permanently jam-proof, and consumes no power except when it switches from one state to the other. Component values aren’t critical.

In his project, Mr. Tyler proposed a more economic method of powering the circuit storing the charge, thanks to the latch consuming virtually no current during standby (if we skip the leakage of capacitors). The main operation concept remained the same; thus, all advantages described earlier, as well as the limits mentioned in that article, can be fully referenced to the sequence switch circuit presented here.

Its unique features permanently resist disruptions and power failure, remember state during power failure, don’t consume power during standby, and have only a short, impulse consumption at the moment of charging the capacitor and triggering. The switch presented here, after each press of the S1 momentary trigger button, executes a sequence of switch-overs: [Activate M1] > [Deactivate M1] > [Activate M2] > [Deactivate M2] > [Activate M1], etc. Therefore, it can be used to switch drives operating in such a cycle, e.g., drives of gates or roller blinds.

In the schematic (Fig. 2, again), the two sets of contacts of these relays (pins 11, 12, and 14) are used to control flip-flops. The remaining two K1 and K2 sets (pins 21, 22, and 24) are used to switch the voltage powering the electric load ON and OFF. The middle exits of the A3 coils for both relays (K1 and K2), which are connected to each other, constitute as a mutual control entry of the switch—it’s activated by temporarily shorting the circuit ground of the S1 button.

Because switch-over cycles of both latches are synchronized with each other, but a quantity of cyles are different, free contacts set themselves into a sequence of connections. This makes it possible to control the M1 and M2 loads as described above.

The system is very tolerant in terms of the components used. You can use two-coil bi-stable relays with various rated voltages. You only need to select the appropriate value of capacitor that allow enough energy to switch a relay. It’s easy to do by checking whether the selected capacitor charged with the relay’s rated voltage is able to switch it after being connected to the coil.

The value of resistors is not critical either. Increasing the resistance value will cause the restriction of switching frequency; decreasing it will result in more frequent and more dynamic reactions. However, when reducing the resistance, you should remember that at the moment control switch S1 is closed to the ground on the blocked coil, there should be a voltage smaller than the relay trigger voltage.