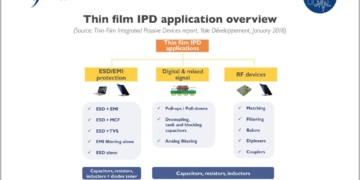 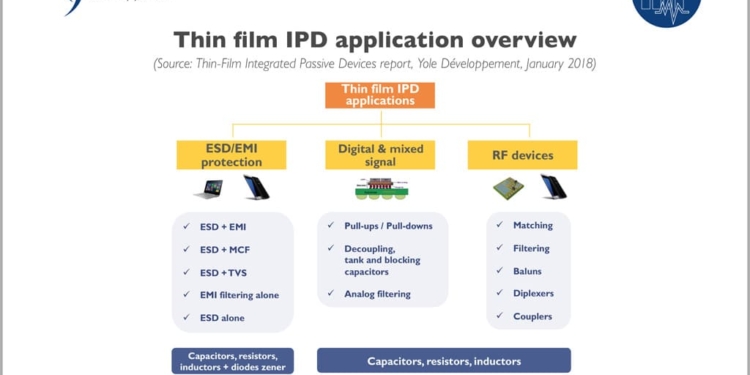 Initially developed to replace discrete capacitors, resistors and inductors, integrated passive devices (IPDs) are having a kind of resurgence thanks to the development of ever-shrinking electronic devices that need to pack more electronics components into smaller spaces. These newer devices are far from simple capacitor and resistor arrays.

Today, IPDs can reduce an OEM’s bill of materials; save board space, and deliver performance advantages at a price point comparable to or better than discrete devices in some cases.

Demcko also notes that in the GHz-frequency range, IPDs are starting to show cost and time-to-market advantages compared with individual device solutions.

Revenue in the IPD market exceeded $750 million in 2017 and is forecast to surpass $1 billion by 2022, according to market research firm Yole Développement (Yole).

IPD growth is driven by automotive, consumer, healthcare, smart wearables and high-end communications applications, Demcko said. Of those, smart wearables — that have size and performance requirements – represent the highest demand, he added.

New opportunities are opening up driven by miniaturization, higher performance and lower cost, according to Yole’s technology and market analyst Amandine Pizzagalli.

The primary applications for IPDs are electrostatic discharge (ESD) and electromagnetic interference (EMI) protection, followed by RF front-end modules that use devices such as IPD baluns and diplexers. Yole said the ESD/EMI IPD segment accounts for more than 60 percent of the total IPD market as of 2017.

For the mixed-signal IPDs, it’s still more of a semi-custom market but that will follow that pattern of ESD/EMI and balun applications, Demcko continued. “It’s just not there yet.” Demcko said mixed technology IPDs are most applicable to medical and instrumentation applications rather than consumer and automotive.

Although silicon remains the mainstream substrate material for IPDs, Yole finds there are alterative materials disrupting its dominance, particularly in RF IPDs, due to silicon’s limitations in insertion loss and dielectric loss. Other substrate materials being evaluated include glass and GaAs.

Yole notes the new 3D technology has opened up new application opportunities. An example cited is Apple’s iPhone 7 and A10 processor that integrates several silicon-trench capacitors under the microprocessor’s bumps.

Players in the IPD market include pure-play manufacturers such as AVX, Murata/IPDiA, and Johanson Technology, integrated device manufacturers (IDMs) & foundries including STMicroelectronics, NXP and Infineon, and substrate and packaging outsourced semiconductor assembly and testing suppliers (OSATs).

“This diversity is actually even more complex considering the different types of manufacturers and their business models: pure players, OSATs, IDMs, foundries, etc.,” said Jérôme, Azémar, senior technology and market analyst at Yole, in a statement. “Therefore many producer types can be involved in IPDs but with different resources and objectives.”

Pure players are driving the adoption of IPD solutions. “These solutions must convince customers that they are vital for implementing passives in their integration. In order for this to happen, IPDs must be seen either as an easily-outsourceable commodity or as a differentiator justifying new supplies,” said Yole.

Yole finds that IDMs/foundries use IPDs as an added value for their products and offer them as an option to customers, whereas OSATs implement IPDs upon customer request. OSAT solutions are typically more standardized parts or are supplied by pure players to integrate into packages.