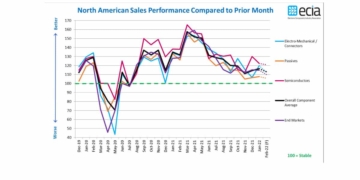 The results from ECIA’s January 2022 electronic component sales survey shows a solid signs to the new year towards stabilization of the component market.

While not as strong as anticipated in the December survey, the results from the January 2022 ECST survey point to a solid start to the new year with the overall sales sentiment index registering at 116.5 for January, slightly up from December’s results. All major component categories and subcategories achieved a sentiment index rating at 100 or higher with Discrete Semiconductors and Electro-Mechanical components leading the pack with index scores above 122. In an encouraging sign of stability, the overall index outlook for February sales is just slightly lower at 113.1.

In a typical year, February sales are softer than the January results. This return to a “normal” pattern would be a welcome result after the wide swings experienced by the industry over the past two years. As expected, the end-market index follows closely with the component index with the overall average measured at 114.8 for January and dipping slightly to 109.9 in the February expectations.

Semiconductor sales sentiment continues to show the greatest optimism among the three major component categories with the index measuring at 122.2 in January and sustaining a strong level at 120.9 in the February expectations. All three of the component indices project a drop between January and February with Passive components coming in at the bottom end with a still respectable 107.6 in January and 105.9 for the February projection.

Discrete components continue to achieve the strongest index levels among the component subcategories as they lead the group in January and remain strong with an index score above 120 looking toward February. Electro-Mechanical components come in just behind Discrete Semiconductors in January but then drop below 115 in February expectations.

In the next tier MCU/MPU and Analog/Linear ICs deliver stable, optimistic results with index scores between 113 and 118 and January and February. Capacitors are another bright spot with index measures above 110 in both months. Resistors, Inductors, and Memory ICs see the lowest scores but still all solidly above 100 looking toward February.

The overall actual component sales sentiment index has now register above 100 for 18straight months dating back to August 2020. Comparing between the three groups surveyed, Distributors report the greatest optimism in January and actually see improved expectations in February.

On the other hand, Manufacturers report solid 100+ sentiment in January that then collapses below 85 in February – the only negative expectation among all three groups. Manufacturer Representatives reported stable expectations above 110 for both months. The reason for the strong divergence in expectations for February between Manufacturers and the other groups is not clear. Perhaps, the Manufacturers may be concerned about economic and inflationary challenges that may slow end-market demand and soften long term bookings.

Concerns related to the economy have grown with inflationary pressures continuing to increase and the Federal Reserve signaling plans to raise rates and begin restricting monetary supply to battle this pressure in the early part of 2022. The challenges of the supply chain are now being understood by the average consumer as they see limited availability or long order delays for many products. Consumers typically have not had to worry about the supply chain, or really ever understood it, for many years.

The fact that this is now a part of common conversations highlights how significant this challenge has become. With no end in sight to the stalled supply chain, manufacturers and retailers continue to face an extremely risky and uncertain future. Common projections for resolving the major supply chain challenges now stretch out into early to mid-2023.

In an encouraging sign, the latest results show significant improvement in lead time pressures continuing in January. The easing of increased lead times began to be notable in November and a continuation of this trend is a positive sign. Semiconductors and Electro-Mechanical/Connector components saw the greatest easing in lead-time pressure. It is hoped that this signals a longer-term downturn in lead times as the most recent data for December lead times in other ECIA research continues to show broadly extending lead times.