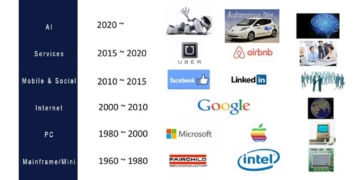 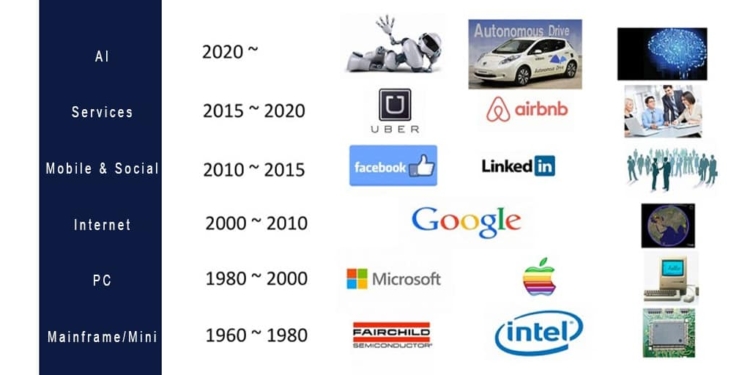 The period 1960–2000 saw tremendous growth in computers due to the invention of integrated circuits in the 1950’s. These were deployed in mainframes, then minicomputers, and ﬁnally in PCs with Intel’s invention of the microprocessor in the late 1970’s. PC’s drove the growth of companies like Apple, Compaq, and Microsoft. By the turn of the millennium, PC’s were ubiquitous and advances in networking allowed them to be connected to the Internet. This next wave of computing drove the growth of Internet search companies like Google and the massive back-end server infrastructure needed to support that. By 2010, mobile computing power was powerful enough to be deployed in smartphones. PC growth leveled oﬀ and smartphone growth grew exponentially.

This was driven not only by use in the Western world but also by growth in Asia and Africa where lack of landline infrastructure made mobile cellular networks the only connectivity option for many people. This growth in portable computing power led to a tremendous growth in new services. Companies oﬀering online services–Uber, Airbnb– were enabled by the smartphone. The era of mobile is in full swing. The shifts from one era of dominant technology to another occurs at an increasingly faster pace. While the Mainframe/Mini and PC eras lasted for 20 years each, technological shifts now occur every 10 or even every 15 years. Smartphone growth has leveled oﬀ, so what are the next growth drivers in electronics? We believe that there are four technology areas that will drive growth (Figure 2):

The era of ‘ubiquitous computing’ is upon us driven not only by advances in computing power but also by advances in software. These software advances are known as Artiﬁcial Intelligence (AI) allow computers to learn from data and when coupled with increasing computing, power signiﬁcantly increases the number of applications and devices. Google’s CEO, Sundar Pichai, said that this will drive the next era of growth (Figure 3).

Compute doesn’t function without inputs from the outside world (sensors), device to device and device to Cloud communication, and power. So what are some of the devices that are enabled by the advances in these four technology areas? Figure 4 shows some possibilities.

Virtual Reality (VR, the complete immersion in a virtual world) and Augmented Reality (AR, the superposition of the virtual world on the real world) has been discussed for years (think the Star Trek Holo Deck), but have only become practical because of advances in computing power and low-cost sensors. Manufacturers are experimenting with several diﬀerent forms of hardware: tethered headsets, standalone headsets, and smartphones. Voice recognition also beneﬁts from AI; Apple’s Siri was the ﬁrst voice assistant (smartphone-based), but standalone speakers in the home are the hot trend now led by Amazon’s Echo (Alexa) and Google Home. Some predict that voice will be the ‘next interface’.

Computer vision is another technology enabled by AI; we’ve become accustomed to typing in a category in our photo library and having pictures in that category searched for and shown to us (A really neat feature when you have 1000’s of photos). Optical sensors are also advancing at a fast pace driven by mass adoption in phones. These advanced sensing technologies coupled with AI software allow dynamic recognition like Apple Face ID (iPhone X phone unlocking) and recognition of images in video feeds.

Medicine is one of the most labor-intensive ﬁelds. Highly skilled doctors and other health professionals obtain ‘snapshots’ of patients health in oﬃce and hospital visits. The emergence of wearable devices coupled with lower cost sensors enables almost continuous personal health monitoring. Analysis of this data using AI enables predictive health applications. In addition, techniques such as image recognition are helping radiologists screen images for diseases. Figure 5 shows more applications enabled by computing power/AI and sensors. Here we also have to add advanced communications and power technologies to realize these additional applications.

Go back 10 years in time and we are at a point where 2.5G cellular communication was established and Wi-Fi was beginning to replace wired ethernet (which had in turn replaced dial-up modems). Now we are in the era of 4G cellular and Wi-Fi is considered a basic necessity. Meanwhile, a device to device short-range communication is increasingly important. Bluetooth to connect keyboards, mouses to your computer and for mobile to mobile communication has now become ubiquitous. As more types of devices come into use, additional communication standards have been proposed (see the upper left in Figure 5). 5G cellular, Zigbee, LowRa are just some of the new standards being proposed for long, medium, and short-range wireless communication.

The combination of sensing power, computing power, and AI is making Advanced Driver Assistance (ADAS) and eventually autonomous vehicles and drones possible. Processing power at the ‘edge’ (on vehicle) is critical in these applications because decisions must be made in real time and can’t wait for (or depend on) communication from the cloud. High energy eﬃciency computing (units per watt) is needed in these applications. Combinations of existing sensing technologies like cameras and ultrasonics with emerging technologies like Lidar will be combined to allow the car to ‘see’. Estimates are that over 200 sensors will be in a vehicle in the next 5 to 7 years. In addition, advanced communication protocols will be required for a vehicle to vehicle and the vehicle to the cloud. The Internet of Things (IoT) is the collection of data from sensors to provide actionable information. This has broad applications in ﬁelds as diverse as agriculture, energy conservation, and manufacturing (part of Industry 4.0). Sensors provide the raw information, but computing power enabled by AI is necessary to make sense of the terabytes of generated data.

Communication between the sensing nodes and the hardware performing the analysis is another challenge. Since the sensors are often deployed in remote locations and there can be thousands of them, the communication is usually wireless and needs to be low power. This is driving new low power communication standards (such as Zigbee, LowRa, Bluetooth Low Energy, 5G cellular). Climate change is a worldwide problem caused by Carbon monoxide emissions. Pollution, especially in rapidly growing countries like China and India, lowers the quality of life for over a billion people. Most of these problems stem from burning fossil fuels in power plants and from emissions from internal combustion engine (ICE) vehicles.

Alternative 2 energy solutions such as Solar and Wind Power and hybrid and electric vehicles can help solve these problems. There is a massive worldwide eﬀort underway to bring down the cost of these technologies and deploy them widely (especially in countries like China and India). All these new applications require new underlying technologies to support them all the way from the system level down to individual electronic components. Stay tuned for a deeper dive into this area.