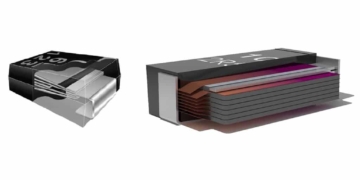 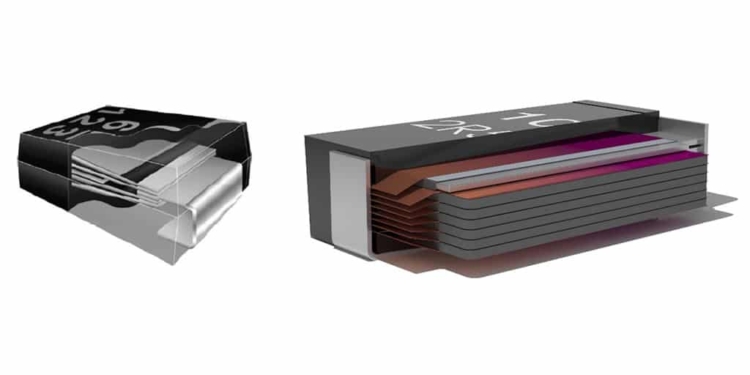 If you keep up with electronic components, the you’ll know solid electrolytic capacitors are all the rage. In this post, we’ll look at these relatively new V-chip style aluminum polymers and compare them to their predecessor – the traditional wet aluminum electrolytic. The advantages include, but are not limited to, lower ESR, better frequency performance, higher ripple handling capability, and longer lifespan.

First, let’s talk about ESR. In general, low ESR minimizes voltage drop and reduces the amount of heat generated by the capacitor as it tries to compensate the current needs of the load. By replacing the wet electrolyte with a solid conductive polymer, the AO-CAPs can achieve ESR values that are in the mΩ range. This is a significant improvement over traditional electrolytic capacitor, whose ESR will be in the Ω range.

Look at the plot below to see a visual comparison. Not only is the ESR significantly lower for the aluminum polymer, but the temperature stability is leaps and bounds better. You will notice the ESR variance based on temperature with a larger delta for the traditional electrolytic (254 Ω), while the polymer is just a small fraction (233 mΩ).

Next, let’s talk about power. Using Joule’s Law in conjunction with Ohm’s Law, we can calculate power to be P = I2R, where I = RMS Current and R = ESR. Note given the same current, the impact to the heating of the component is defined by the ESR value, which in turn limits is ripple current capability.

Because polymers have significantly less ESR, the ripple current handling capability is improved. Notice that in most cases, the allowable ripple current is several times greater than an equivalent traditional electrolytic.

Impedance is also important – especially for decoupling applications. Here, you can see the delta in impedance between traditional electrolytic and polymer. Polymers have about an order of a magnitude less impedance!

Finally, let’s talk about life. Reference the graph below showing temperature versus life. The polymer starts to show its large increase in life at lower application temperatures. The improvement in life is staggering. This is due to the solid electrolytic system that the polymer has. The main wear-out mechanism in traditional electrolytic caps is the dry-out of the electrolyte. The polymer lacks this wear-out mechanism, and the life is only constrained by the oxidation of the polymer.

Some good rules of thumb you can use to estimate the life of a capacitor: