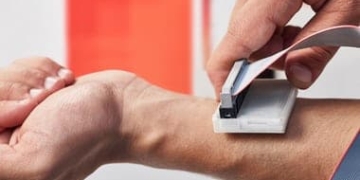 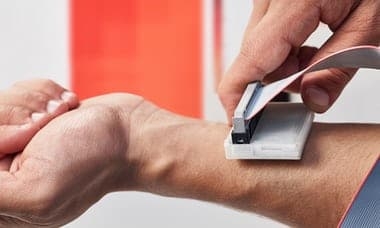 Hand-held device dubbed sKan measures skin temperature to quickly and accurately identify melanoma, and could save lives around the world

A low-cost hand-held device which could help save lives across the world by diagnosing skin cancer early has won its inventors a prestigious international award and cash prize of £30,000.

Four graduates of McMaster University in Canada have scooped the James Dyson award for their invention, dubbed sKan: an easy-to-use gadget which measures skin temperature to quickly and accurately identify melanoma.

For the final year project of their engineering degrees at the college, based in Hamilton, Ontario, the students set out to tackle the challenges of melanoma diagnosis, where current options range from unreliable visual inspections to invasive and expensive biopsies.

Their solution is a cheaper, portable system that could be used by doctors and other health professionals to spot cancer early, helping health services save time and money. The sKan uses thermistors – thermally sensitive resistors – to detect if a suspect region of skin is malignant through thermal heat mapping.

In the UK, 37 people are diagnosed with melanoma every day. When treated early it can usually be cured, but the disease still claims tens of thousands of lives every year. According to the World Health Organisation, skin cancer accounts for one in every three cancers diagnosed worldwide, with global incidence on the rise.

But existing early diagnostic methods rely heavily on visual inspections with the naked eye, which can be inaccurate and unreliable. In the UK one in every 10 skin cancers are diagnosed in the “late” stage, and it can take weeks for patients to see a dermatologist.

Cancerous cells have a higher metabolic rate than normal cells, which means they release more heat. And after a thermal shock is applied (for example, via an ice pack), the cancerous tissue will regain heat faster than the non-cancerous tissue.

The sKan incorporates an array of thermistors which are placed on the suspect lesion or mole and can track any return to ambient temperature after being cooled. The readings are digitised and the results displayed as a heat map which indicates whether or not melanoma is present.

“By using widely available and inexpensive components, the sKan allows for melanoma skin cancer detection to be readily accessible to the many” said award founder Sir James Dyson. “It’s a very clever device with the potential to save lives around the world”

The team behind sKan – Michael Takla, Rotimi Fadiya, Prateek Mathur and Shivad Bhavsar – was on Thursday crowned the international winner of this year’s James Dyson award, having already clinched the top prize in Canada.

Takla said the team was excited by the “huge global potential” of their invention. “Winning the James Dyson award means the world to us. The prize money will help us to continue developing a medical device that can saves people’s lives. We are truly humbled to be given this remarkable opportunity”.

The team plans to use the prize money to develop the product to a level to obtain regulatory approval from the Food and Drug Administration, which could lead to its adoption by medical practices worldwide.

The James Dyson award – currently run in 23 countries – recognises and rewards university-level designers and engineers for innovative solutions to conundrums.

featured image: The device could be an alternative to current diagnostic tests which range from unreliable visual inspections to invasive and expensive biopsies Photograph: Courtesy James Dyson Foundation