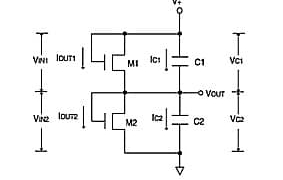 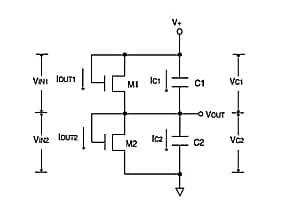 The use of supercapacitor series stacks are growing for many systems used in backup power storage or battery life extension. One of the most critical circuit design goals for such systems is minimizing the steady state DC power dissipation. For that reason, MOSFETs deployed in circuits that balance voltage and leakage current in supercapacitor series-connected stacks of two or more, can be configured to burn zero power.

To grasp the concept of zero power burn in balancing the individual supercapacitor cells, I will describe a circuit with current burn of 0.003 micro amperes (uA), or ~0.1% of 2.80 uA. While this is not absolute zero, the amount of energy used is so minimal that it is virtually zero. Using MOSFETs to balance voltage in supercapacitor cells stacked in a series contrasts to balancing voltage using op amp, which burns quiescent current.

Supercapacitors are becoming increasingly useful in high-voltage applications as energy storage devices. When an application requires more voltage than a single 2.7-volt cell can provide, supercapacitors are stacked in series of two or more. An essential part of ensuring long operational life for these stacks is to balance each cell to prevent leakage current from causing damage to other cells through over-voltage. For those seeking more information on how this works, I invite you to read our previous submitted article, “MOSFET-based current balancing cuts power use in supercapacitor stacks”

There are actually three possible scenarios of zero power burn of balancing circuitry. First, the power dissipated can be near zero, meaning that it is substantially less than a reference power dissipation level.

The second scenario is that the possible power dissipation is actually zero at a steady state DC level.

To understand how these three scenarios play out and achieve zero power burn, it is best to go through an example and analyze in three small steps what actually happens when a SAB MOSFET goes through its balancing act.

There is leakage (bias controlled) current going through each one of the MOSFETs, referred to as lOUT1 for M1 and IOUT2 for M2.

A step-by-step example will illustrates how Supercap Auto Balancing (SAB) MOSFETs balance supercapacitor stacks with zero power burn. Assume that supercapacitors C1 and C2 have same capacitance values but different leakage currents profiles as shown in the graph featured in Figure 2 below.

The circuit action in Figures 2 and 3 above can best be illustrated in three separate smaller steps.

Without the SAB MOSFETs, VOUT voltage continues to rise towards 4.60V. If it does, it will slowly destroy C2 as the VC2  = VOUT voltage exceeds 2.7V maximum rated voltage towards 2.9V, causing for example, an open circuit to C2 and rendering the entire supercapacitor series stack to become inoperative in a catastrophic failure event.

Any attempt to increase VOUT voltage will meet with significant increases of IOUT2 thereby limiting further VOUT voltage increase. At this point VOUT resists any further changes due to minor changes in supercapacitor leakage currents of both C1 and C2. When this equilibrium point is reached, the total leakage current of IOUT1 + IC1 is now ~2.203 uA instead of the IC1 of 2.80 uA without leakage current balancing. This example illustrates that “negative”, or below zero power burn is possible when the balancing circuitry utilizing SAB MOSFET is deployed.

In this example, the extra power is dissipated by IOUT1 which is about 0.003 uA. IC1 of C1, now at ~2.20 uA is the dominant leakage component internal to the supercapacitor, and it is less than the reference leakage current specified as 2.80 uA at 2.3V cell voltage. Net additional current burn is 0.003 uA, ~0.1% of 2.80 uA, which is approximated to zero power burn. Note that this 0.1% is that of the leakage current specification of the supercapacitor. So if that leakage current is greater or lesser, for different make or models, the extra power burn can be scaled accordingly.

For circuits described above, MOSFETs sense that the voltage wants to go up, so one of them starts leaking current very quickly, without allowing the voltage to go up much. Because it is exponential in nature and the current goes up, it will automatically float to a point where the MOSFET current IOUT1, plus the IC1 current would be equal to the leakage current of MOSFET, IOUT2 plus IC2.

To summarize, MOSFETs can:

The examples illustrated above explain the zero power dissipation operation of the balancing circuit action. However, there are numerous other possible combinations, where the SAB MOSFET balancing solution, while adding little or no leakage, does allow a lower voltage bias on the leakier supercapacitor. The actual total leakage current, and hence the power dissipation caused by the series-connected supercapacitors can be potentially less than not balancing the circuit at all.