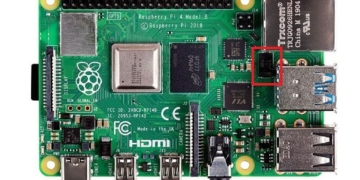 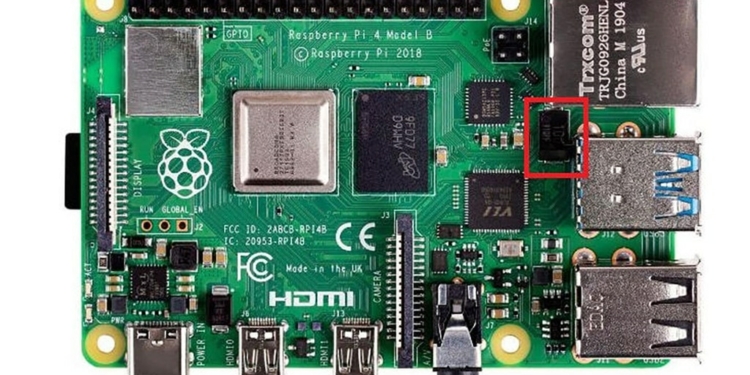 Additionally the newly developed low-cost power supply of the Raspberry Pi  4 is equipped with Panasonic Polymer OSCON aluminium capacitors, offering a reliable, high-tech and cost efficient solution for end users. As both companies focus on contributing to society and producing cost efficient, high performance and high quality products, the development of the new Raspberry Pi with Panasonic Industry Europe components as a perfect example for cutting edge technology in a low cost application led to a charity event in Cameroon, that both companies were very happy to support.

MLCC replacement on the PCB

The Raspberry Pi Foundation replaced two 1206 MLCCs with just one of Panasonic aluminum polymer SP capacitors that contributes to the performance and reliability of the most powerful Raspberry Pi microcomputer ever.

With a compact housing of only 7.3 x 4.3 x 1.9 mm and a capacitance value of 100µF as well as low ESR characteristics (15mΩ max.) the SP capacitor helped optimizing the design processes as well as the capabilities of the Raspberry Pi 4.

MLCCs cannot achieve the same high capacitance as polymer for the same given footprint and volume. Also the MLCC exhibits strong capacitance dependence on DC bias due to ferroelectric dielectric materials used for MLCCs.

The capacitance of these devices varies with applied DC voltage which can lead to a capacity drop of more than 70% compared to the given specs on the data sheet. For polymer capacitors the capacitance does not vary significantly when the application voltage changes. These advantages allowed a lower part count using SP-CAP with better capacitance range and temperature profile instead of MLCCs for Raspberry Pi 4 model, which not only saved space on the PCB but also was a cost factor by saving costs on parts and reducing the production steps.

The newly introduced low cost power supply for the Raspberry Pi 4 uses two OSCON Polymer capacitors with a rated voltage of 6.3VDC. Excellent long-life characteristics, efficiency and reliability are secured due to the highest ripple current capabilities (5600 mA rms) in the entire capacitor market. With an operating temperature range from -55 up to 105°C the capacitor is capable of withstanding harsh environments for up to 5000 hours which renders it ideal for demanding applications like the Raspberry Pi, that is used in challenging surroundings.

The Raspberry Pi Foundation and Panasonic Industry Europe donated 100 Raspberry Pi microcomputers and further technical equipment to the Lycee D’Akwa-Nord Bonamoussadi High School and the University of Science in Douala. Even in demanding surroundings the robust microcomputers are performing reliably and engage pupils and students to get in touch with the latest technology.

The Panasonic principle “Contribution to Society” corresponds to the Raspberry Pi Foundation’s goal to facilitate the next generation pupils from emerging countries to engage in computer science and coding. The pupils and students are experimenting with Raspberry Pi/Panasonic Industry Europe driven applications and developed impressive solutions and applications like a GPS supported drone or a gas-, temperature- and humidity sensing device and even a fully-autonomous security alarm system, that detects light and human movement.

In total over 250 pupils, undergraduate, graduate and doctoral students together with their professors followed the educational and demonstrational sessions after the Raspberry Pi microcomputers were handed over. Panasonic Industry Europe will re-visit the schools and university in Cameroon to follow and further support the developments of the pupils and students.