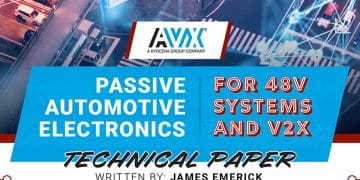 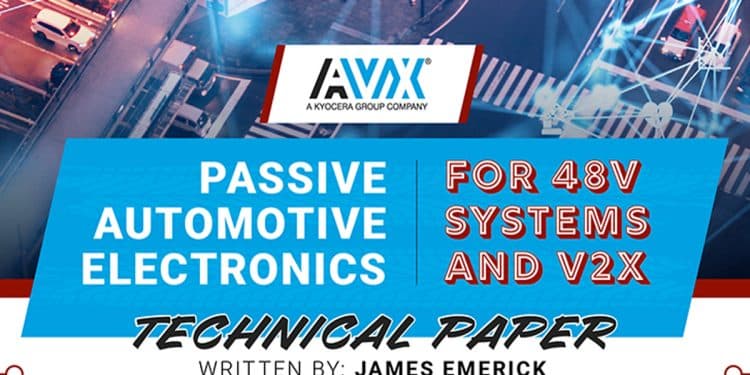 The shift toward 48V subsystems and the integration of vehicle-to-everything (V2X) communication are two examples of automotive applications that require new classes of electronic passives (capacitors, inductors, antennas, interconnect). The trend and suitable components are discussed in AVX Corporation technical papers written by James Emerick.

Two of the driving forces behind the quickly evolving automotive industry are fuel efficiency and safety. Fuel efficiency is primarily driven by a combination of regulatory requirements for reduced CO2 emissions and consumer demands for improved operational economy. While always paramount, safety has seen renewed activity due to the advancements of driver-assist and driverless technologies. The shift toward 48V subsystems and the integration of vehicle-to-everything (V2X) communication are two prime examples of significant advances in efficiency and safety, respectively. In both cases, new classes of electronic passives (capacitors, inductors, antennas, interconnect) are required to bring these technologies to mainstream products while meeting strict automotive regulatory standards.

Two of the driving forces behind the quickly evolving automotive industry are fuel efficiency and safety. Fuel efficiency is primarily driven by a combination of regulatory requirements for reduced CO2 emissions and consumer demands for improved operational economy. While always paramount, safety has seen renewed activity due to the advancements of driver-assist and driverless technologies. The shift toward 48V subsystems and the integration of vehicle-to-everything (V2X) communication are two prime examples of significant advances in efficiency and safety, respectively. In both cases, new classes of electronic passives (capacitors, inductors, antennas, interconnect) are required to bring these technologies to mainstream products while meeting strict automotive regulatory standards.

Numerous regulatory agencies worldwide have taken a stand in limiting and setting targets for greenhouse gas emissions. The European Commission, for example, has developed a 2021 target of 95 g CO2/km, or a fuel efficiency of approximately 4.1 l/100 km. (Reducing CO2 emissions from passenger cars – before 2020) This same regulation attempts to encourage eco-innovation by offering emission credits for new technologies that reduce CO2 emissions. In the United States, the Environmental Protection Agency (EPA) and the National Highway Traffic Safety Administration (NHSTA) have adopted The Safer Affordable Fuel-Efficient (SAFE) Vehicles Rule, which implements standards for fuel economy and carbon dioxide that increase 1.5% in stringency each year from model years 2021 through 2026 (The Safer Affordable Fuel Efficient (SAFE) Vehicles Final Rule for Model Years 2021-2026). The internal combustion engine’s fuel efficiency has to be augmented by electric hybridization to hit these aggressive goals.

The low hanging fruit in this quest for efficiency is simply minimizing mechanical power draw from the engine delivered to auxiliary systems such as AC compressors and brake vacuum pumps. Converting these components to on-demand electronic equivalents allows for a completely different approach to optimizing engine performance. Unfortunately, traditional 12V power busses are simply not up to the task, especially as the sheer number of automotive sensors, electronics, and computers grows every year. To handle this increased electrical demand, increasing the bus voltage from 12V to 48V provides a 4X increase in available power without incurring additional losses in wiring and connectors (“The shift to 48V in automotive systems: What you need to know”). Such a voltage increase, however, is no simple feat. The automotive industry has been married to traditional 12V power supplies since its inception. The transition to 48V will require a shift, with early adoption requiring a hybrid 12/48V approach. See figure 1 where both voltages exist in the same system.

A more detailed look at a 48V controller is shown in the following schematic. High power MOSFETs make use of the 48V power to drive a brushless DC motor. Simultaneously, the traditional 12V system drives the engine computer (ECU) and other legacy systems while maintaining communication with the 48V system.

This type of hybridization can be taken a step further by replacing a vehicle’s traditional starter motor with a motor/generator capable of recapturing energy during braking. If an even more powerful electric motor is employed, it can replace the internal combustion engine at low speeds entirely, allowing for peak efficiency optimization.

When considering regenerative braking, supercapacitors often come into play to handle pulse power draws. AVX offers a new series of cylindrical electrochemical double-layer capacitors that provide excellent pulse power handling characteristics based on the combination of very high capacitance and very low ESR. Used by themselves or in conjunction with primary or secondary batteries, they deliver instantaneous power pulses as needed. Conversely, regenerative systems often experience high voltage transients and require robust protection devices. MLV, MLCC, Niobium, and Tantalum Poly Capacitors are often employed in the control circuits of these systems. AVX TransFeed®Automotive Series varistors with feedthru filter construction are AEC-Q200 qualified and provide bi-directional ESD protection with low parallel inductance. They also offer excellent decoupling capability for all high di/dt environments and significant noise reduction in digital circuits. Where designers are concerned with both transient voltage protection and EMI attenuation, either due to the electrical performance of their circuits or due to required compliance to specific EMC regulations, the TransFeed® product is an ideal choice.

The 12V and 48V batteries themselves also require monitoring individual cells for temperature that could indicate damage. AVX accurate leaded and leadless thermistors feature small size and rapid response time, making them an ideal match for this task. They are available in multiple temperature stability options, various coating and leads configuration, and optional customization based on customer requirements. In addition, they are qualified to automotive (AEC-Q200) standards.

Enabling communication among vehicles (V2V), as well as between vehicles and infrastructure (V2I) or pedestrians (V2P), has been a long development road dating back to 1999 when the bandwidth was first allocated. Collectively known as vehicle-to-everything (V2X), this technology straddles the regulatory domains of numerous agencies in the United States, including the Department of Transportation (DOT), the NHSTA, and the Federal Communications Commission (FCC). The common goal is admirable, focused simultaneously on improving safety by reducing accidents and reducing energy consumption through traffic awareness and control. For example, in the V2V domain, vehicles can alert drivers to impending forward collisions, indicate when blind spots are occupied, offer do not pass warnings, and offer other similar driver assistance features. The V2I domain is even more interesting, as it integrates the infrastructure itself into the system. Traffic lights can be prioritized for emergency responders and public transit schedules, heavy vehicles and freight transport can be notified in advance of traffic and signal lights to minimize braking, and even predictive analysis of possible red-light violations can be flagged and signaled. (“The emergence of C-V2X products provides direct V2I benefits”)

Standardization and wide adoption of such a system is mandatory for any value proposition to see the light of day. Unfortunately, the V2X access layer quickly diverged into two competing camps: the WLAN protocol (DSRC based on IEEE 802.11p) and the cellular-based protocol (C-V2X over LTE and 5G). This split led to further issues with FCC spectrum allocation and delayed finalization of a standard even today.

The basic V2X structure is shown in figure 3, and is the basis for existing DSRC solutions (Hasan et al.). Vehicles primarily communicate directly with each other or with the internet through road side units (RSU’s.)

C-V2X on the other hand, relies entirely on cellular communications between objects in the network. At the same time, this creates a potentially easier integration with existing infrastructure, especially considering the impending roll out of 5G. See figure 4 for an example.

While DSRC V2X has been in production since 2015 and equipment has already been deployed in the United States and Japan, C-V2X has recently taken center stage with the impending rollout of 5G networks. China has undertaken a large scale capacity test based on the C-V2X protocol, and has garnered the support of chipmaker Qualcomm (“Qualcomm Joins with Automotive Industry to Complete C-V2X Large-scale Capacity Test and Interoperability Demonstration”). China is expected to lead the global V2X deployment with 629,000 light vehicles produced in 2020, all based on the Autotalks chipset (Autotalks’ Chipset is Selected for the Company’s First Mass Production C-V2X Program in China). Qualcomm has made similar inroads to successful adoption of C-V2X in Europe. Several products featuring their 9150 chipset have completed European certification under the Radio Equipment Directive (RED) while the European Telecommunication Standardization Institute (ETSI) has recently released new standards (EN) defining C-V2X as an approved access layer for intelligent transportation systems (“Multiple products get European C-V2X certification to accelerate deployment”).

In order to accelerate V2X adoption of auto makers while the regulatory dust settles, Autotalks has prudently incorporated both the cellular and wifi based layers into their chipset (“One global V2X solution: DSRC and C-V2X”). See figure 5 for an example of typical V2X system. Autotalks chipset is integrated alongside a positioning system, Bluetooth LE, CAN and automotive ethernet busses, and existing automotive WiFi / Cellular radios.

The analog and RF focus of the subsystems will create a demand for many high quality, automotive grade passive components. Depending on the complexity and required features, this may include antennas for 5.9 GHz cellular, 2.4GHz and 5.0GHz Wi-Fi, and 2.4GHz Bluetooth. There may be potential need for dual and tri-band antennas alongside GNSS antennas. Ethertronics, An AVX Group Company, is a leading supplier of innovative antennas covering standard industry frequency bands and applications, including: Cellular, LTE, 5G, WiFi, Bluetooth, Zigbee, NB-IoT, LTE-M, LoRa, ISM, GNSS, V2X, and UWB.smt components and conductive epoxiesvehicle-to-everything (v2x).

Ethertronics antennas are available in standard and custom configurations using a wide variety of materials to ease antenna integration and maximize performance. Ethertronics’ passive antennas establish benchmarks for speed, range, efficiency and reliability across a wide variety of applications, from mobile phones to Wi-Fi, Automotive, and the Internet of Things (IoT).

As with any automotive electronic design, MLCC and feed-through capacitors will likely be required. AVX produces a wide range of multilayer ceramic capacitor technologies that meet or exceed the requirements of AEC-Q200 and serve many of the interfaces shown in the functional domains see figure 6 (“6 Key Connectivity Requirements of Autonomous Driving”).

Regulatory commitments for CO2 reduction and improved fuel economy are interestingly intertwined with communication systems for enhanced safety. The near future will present us with various designs of hybrid vehicles in constant communication with each other and the world around them. These new designs and consumer expectations of high reliability and low cost have created a demand for electronics passives that have required further technological advancement and design ingenuity. AVX has led the way in bringing these passives to the market in time for tier 1 auto manufacturers to incorporate them in their latest products.