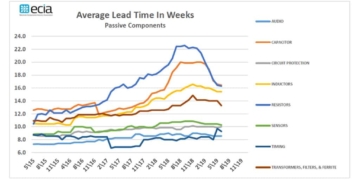 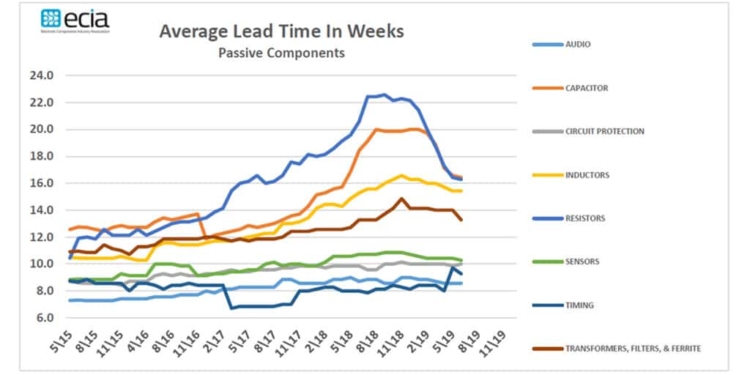 After an extended period of long lead times and robust demand, suppliers of passive components such as capacitors, resistors and inductors are now bearing the brunt of a weakening electronics market that is manifesting itself in slackening sales of electronics goods and prompting suppliers to lower quarterly forecasts.

As electronic product design cycles typically involve the specifying and design-in of passive, interconnect, and electromechanical components later than semiconductors, suppliers of those parts typically feel an industry downturn a bit later. Unfortunately, that also means they will likely experience any upturn at a later point.

The results prompted Vishay to cut $15 million in annualized costs, including some reported headcount reductions, across its global workforce.

“In the second quarter, high levels of inventories in the supply chain led to lower than expected demand, mainly from distribution, which negatively impacted Vishay’s financial performance,” said Gerald Paul, Vishay’s president and chief executive, in a statement. “We are now in the process of adapting manufacturing capacities and capital expenditures to short-term volume requirements. We announced global cost reduction and management rejuvenation programs to lower Vishay’s fixed personnel costs by $15 million annualized at a cash cost of $25 million.”

Vishay’s third quarter forecast is bleak. Paul stated, “For the third quarter we expect an acceleration of the reduction of inventories in the channel and guide for revenues in a range of $600 to $640 million and gross margins of 24% to 25%, at the same exchange rates as in the second quarter.”

Rival passive component supplier AVX Corporation also saw a downturn in its most recent quarter. AVX Chief Executive Officer and President John Sarvis, said in a statement, “We completed the first quarter of our 2020 fiscal year with net sales of $401.8 million, down 8.5% compared to the previous quarter and down 11.5% from the same quarter last year, reflecting extended inventory levels in the supply chain for commodity products and a weaker global market for electronic components.” Net income for the June quarter was $54.7 million, or 32 cents per diluted share compared to $56.0 million, or 33 cents per diluted share a year ago.

“Our various distribution channels experienced weaker activity as inventories remain extended,” Sarvis added. “The economic environment is in flux, and uncertainties with respect to international relations and trade regulations continue to put pressure on the global economy.”

Japan-based TDK Corporation saw passive component sales in its most recent fiscal quarter of 98.3 billion yen, down 12% year to year. TDK said sales of ceramic capacitors, aluminum electrolytic and film capacitors, and inductive components all declined from year-ago levels, largely due to weaknesses in markets such as automotive and industrial.

One effect of slowing sales has been an easing of severe shortages for many passive components. According to data from the Electronic Components Industry Association (ECIA), average lead times for capacitors that hovered around 20 weeks for much of the second half of last year and early next this year are now averaging 16 weeks. Likewise, resistors which saw lead times of 22 weeks are also down to 16 weeks, according to the ECIA (see chart below).