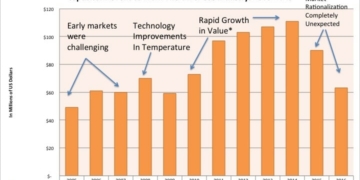 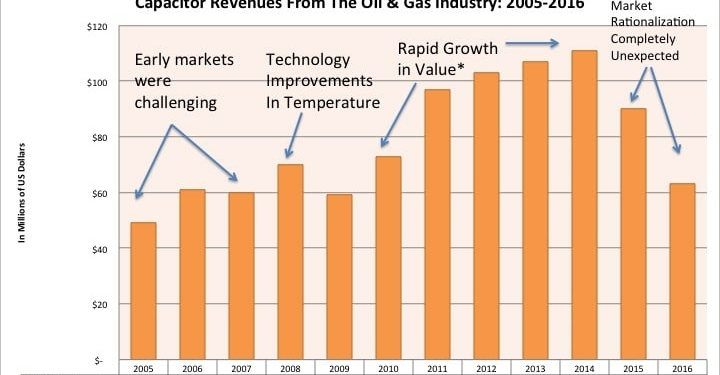 The following chart from “Capacitor Markets In The Oil & Gas Electronics Industry” illustrates the global markets for oil & gas industry capacitors showing how the market remained relatively small between 2005 and 2009, but then blossomed between 2010 and 2014 showing dramatic growth. The downturn in 2015 and 2016 has eroded 40% to 50% of demand- sending the market back to its 2008 level. Still, it is relatively straightforward that once the supply imbalance changes and inventories are depleted the market will grow again. What’s more is that the downturn, which was swift and merciless (once again showing all leadership in the components market just how fast the market can turn negative or positive), but making major customers such as Schlumberger, GE, Haliburton, and Weatherford have to rely more heavily on technology to survive this downturn; and it will also be technology that they rely upon to remain lean when the market returns to parity and continues its growth in global value. In Oil & gas electronics, technology still has a long way to go before it can claim that it can withstand all mother nature has to throw at it, which is somewhere beyond 300 degrees C.