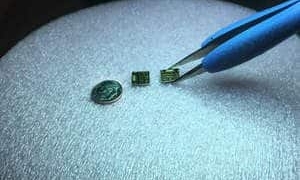 The chips are based on the firm’s patented MuxCapacitor voltage reduction technology which was previously available on a 1 micron processes.

Chip-level control of charge transfers allow a network of capacitors to be used to lower voltages instead of the more usual conversion technique which relies on inductance and transformers, that introduce losses.

According to Helix, which was previously known as Semitrex: “The 0.18 micron process shows dramatic improvements in key areas, including the enablement of single-stage conversion efficiencies in the range of more than 98%.”

“The switch to a 0.18 micron process, something that has never been done before, opens the door to advancements across the entire field of power conversions. Our competitors all employ a traditional, legacy approach to power conversion. More specifically, they base their conversions on inductance and the use of transformers. Our technology is capacitance based, which allows us to achieve efficiencies that were previously unheard of.”

According to the firm, this will increased the power rating of Helix Semiconductors’ chipset from 10W (at 1 micron) to as high as 50W to 75W.

This technology supports high voltages of over 400V.

“From the semiconductor fabrication level on up through systems design, we are aggressively developing new technology that provides unprecedented efficiencies in normal operation, low power and no-power scenarios,” Blomquist added.