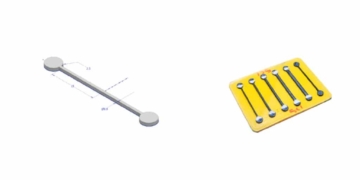 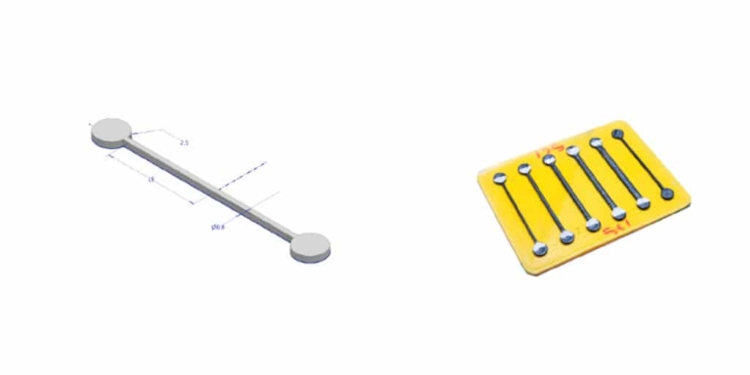 “With this novel capability to directly create electrical components integrated into 3D printed physical objects designers can envision and 3D print new and/or improved devices with embedded electronics, which they could not do before,” the researchers explain.

Using biodegradable conductive filament to 3D print circuits offers environmental benefits, and 3D printing technology allows for more design freedom, enabling manufacturers to better integrate electrical components within objects. The researchers used a MakerBot Replicator 2X Experimental 3D printer, which has dual extruders, for their work. A test print was created, and then two modifications were made to the 3D printer: an extruder block upgrade, which helped improve the consistency of prints due to reduced slippage of the stepper motor pinion gear; and the attachment of two additional cooling fans, one for each extruder.

Test piece before (a) and after (b) the modifications

“To integrate 3D printed circuits with external components such as LEDs, a suitable contact point has to be provided,” the researchers explain. “The 3D printed contact point should provide sufficient rigidity to secure external components while minimizing contact resistance. Due to the resistive property of the conductive filament, contact resistance plays a significant role in determining the final volume resistance of the test sample. It is for these reasons that contact pads are added to the test sample.”

Each contact pad is a cylinder 5 mm in diameter. The top surface is covered in silver conductive paint to minimize the contact resistance. This provides a uniform resistive area when performing resistance measurements.

The resistivity of the 3D printed resistors varied depending on their build orientation and 3D printing process parameters.

“Resistor expansions in x axis resulted in increased resistivity, but this increase was not linear,” the researchers conclude. For z-axis expansions, the resistivity increase was mostly linear. The resistivity vs. length graph for y-axis expansion exhibited a minimum value in the middle of the test range.”
The paper offers several guidelines and recommendations for the designing and 3D printing of electrical resistors. Although the researchers used a simple design for their study, 3D printing allows for much more complex designs to be created from conductive materials and incorporated into electrical objects. As conductive materials for 3D printing start becoming more readily available, the variety of 3D printed electrical objects should expand, opening up new applications in a range of industries.

Authors of the paper include Nebojsa I. Jaksic and Pratik D. Desai.