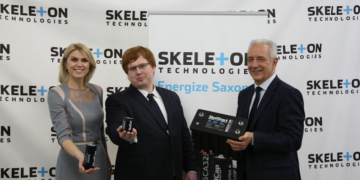 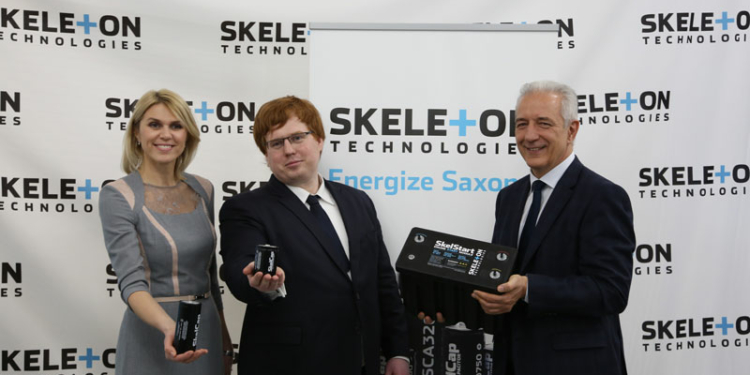 New manufacturing facility in Germany capable of producing up to 4,000,000 ultracapacitor cells per year. Skeleton Technologies, Europe’s leading ultracapacitor manufacturer, today announced the opening of a new production line in Saxony, Germany. The new facility is the largest in Europe and will enable the business to greatly enhance its production capacity. The expansion is expected to support over 50 new jobs at the facility by 2019 and is the result of a 6.2 million Euro investment by Skeleton Technologies, supported by federal and state funds from the program for the promotion of the joint task to improve the regional economic structure (GRW).

Ultracapacitors are a technology used for fast energy storage. Capable of rapid charging in a matter of seconds and able to provide over 1 million charge/discharge cycles, they offer benefits in industries where reliable, instant power is a necessity. This is in contrast to more traditional batteries which are used for slow energy storage due to much longer charging times and lower life cycles.

“We are delighted to open this new facility today, and are excited for the capabilities that it gives our business,” said Taavi Madiberk, CEO, Skeleton Technologies.

“The investment that we were able to make in expanding our production line here is indicative of the demand that we are seeing for ultracapacitors from a huge variety of industries – including the automotive sector, power grids, heavy transport and haulage. Our improved scale as a result of this opening will enable more businesses to realise cost savings and energy efficiencies based on our technology.”

“I am pleased about the commitment of Skeleton Technologies in Großröhrsdorf. The expansion connects many new jobs with an industry that has great potential.”said Stanislaw Tillich, Saxony’s Prime Minister.

“The first Estonian investment in the manufacturing sector in Saxony is also a proof that not only conurbations, but also smaller cities and rural regions in Saxony are attractive for industrial settlements. The new production line will strengthen the region and the entire Free State of Saxony as a home of an innovative and powerful high-tech industry.”

“Skeleton Technologies is a truly transformative business operating in a sector that will be top of mind for many industries as they look to save costs and emissions, and we look forward to seeing the business continue to thrive in future.”

Skeleton Technologies’ investment in production with this announcement is complemented by continued focus on research and development into the applications of ultracapacitor technologies. This follows recent 15 million Euro funding from the European Investment Bank under the European Growth Finance Facility program aimed at helping Skeleton Technologies become a full energy storage systems provider, providing customers with an end-to-end hybrid energy solution.