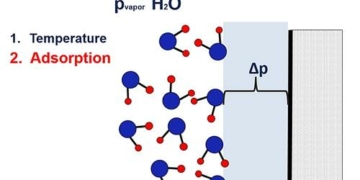 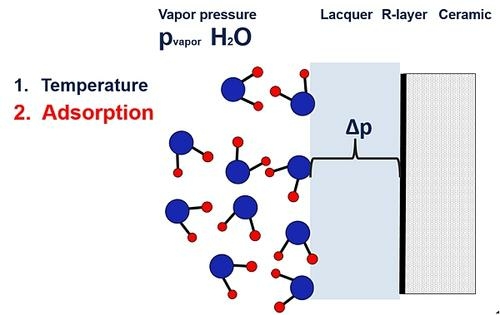 Analog techniques require a certain precision of components’ electrical properties and a good prognosis of the changes that can occur during an application. This paper introduces a method for the prediction of electrical parameter changes due to aging.

The technological quality and reliability of electronic analog applications is mainly dependent on four parameters, or properties, of the electronic components in use:

Drifts in major electrical properties during use (e.g. the resistive value of resistors) can be a trigger for changes or drifts in other important component properties (e.g., noise, TCR, nonlinearity). High-humidity, high-temperature environmental conditions are still a challenge for many electronic components’ reliability. Their aging and degradation behaviors, as well as their acceleration factors, are not always understood well.

Thin film resistors are widely used in the electronics industry, and in our study, we’ve chosen them as a good general representative for the following component design: an aging or degrading functional layer on a base material protected by an organic coating. This is the basic design for many passive and active electronic components. The long-term study on the behavior of thin film resistors, in dry heat and biased humidity environments, has become the foundation for a newly developed general model covering all aging conditions in the whole temperature-humidity-time expanse, system characterization, and components’ health prognosis (lacquered or molded components having degrading functional layers).

The results were presented in 2014 at CARTS and AEC-RW and published in a peer-reviewed paper, “Influence of Bias Humidity Testing and Application on Time-Dependent, Arrhenius-Law-Based Stability Predictions for Thin Film Resistors” (subscription required).

Test program for an enhanced investigation
Our test plan considered the following points:

Results and Conclusions
It’s already common knowledge that biased humidity can be destructive to many components, depending on relative humidity and temperature. The first interesting finding of this study is that we must thoroughly differentiate between oxidation/passivation effects and corrosion mechanisms. Two different mechanisms of degradation become obvious: aging (exponentially saturated → 40°C/93% RH, 70°C/90% RH) and destructive (exponentially increasing → 85°C/85% RH) corrosion conditions.

Figure 1 shows the resulting drift characteristics after 4,000 hours of exposure time. Even at drifts as low as ΔR/R < 0.5%, the difference becomes clear. To be able to compare the different characteristics, we’ve proposed a standardization of the R-drifts to the equivalent exposure time. For example, we can estimate it as nearly nondestructive if setting this standardized drift on a low but still significant level of ΔR/R = 0.2%. With this approach, it now becomes possible to compare all biased humidity test data directly — inclusive HAST 130 results, etc.

Influencing parameter on components’ degradation/aging
We have clearly seen that temperature and humidity concentration are the driving parameters on drift or aging/degradation of the functional layer of components. Therefore, our second proposal is to use the actual present vapor pressure pvapor, instead of the relative humidity RH.

The electrical component is normally built of a core material covered by a sensitive functional metallization, which is protected by a seal, lacquer, or mold. Our thin film resistor has a base or core material of alumina, a NiCr-based R-layer, covered by an electro-isolation lacquer, as shown in Figure 2. At given environmental conditions, a pressure difference Δp exists between the lacquer-layer interface and the outside. 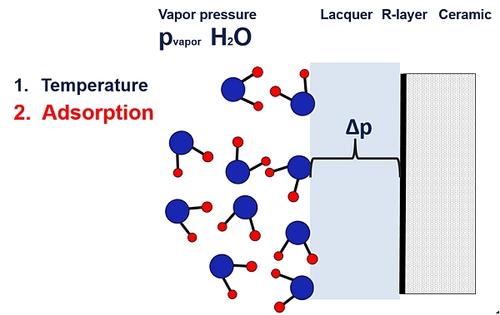 Equalization of pressure leads to a diffusion effect of water into the volume of the lacquer or organic coating. The concentration of water will increase in the interface area by the pressure diffusion effect. High temperatures and bias voltage in the presence of water will accelerate oxidation and cause electrochemical corrosion at the metallization. Higher temperatures will lead to a higher risk of destruction under the thermal and biased conditions.

Building the model
As shown in detail in the peer-reviewed paper “Influence of Bias Humidity Testing and Application on Time-Dependent, Arrhenius-Law-Based Stability Predictions for Thin Film Resistors,” water diffusion into the coating can be derived and adapted from a textbook formula. The system of pressure diffusion in electronic components can be described by one quite simple formula:

Figure 3
General formula.
This general description can be interpreted as the function of a straight line y = ax + b, where y stands for ln√ of the exposure time texp, and x for 1/T (= inverse absolute temperature T in Kelvin), as shown in Figure 3.

The factor “a” allows a direct reading and calculation of the activation energy EA of the components’ functional layer, and the constant “b” the diffusion properties of their coating (D: diffusion coefficient in µm2/h; xlacq: thickness of organic coating in µm; k: Boltzmann constant = 8.62 x 10-5 eV/K).

Since the standardized exposure time ln√texp is a direct function of inverse temperature 1/T, the components’ properties and health prognosis in the whole temperature-humidity-time expanse, as well as their system characterization, can be described and summarized in one graph: the ln√t – 1/T diagram. 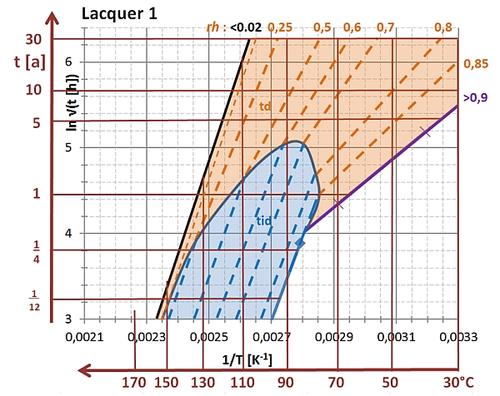 The example illustrates that an exposure time of texp > 30 years and resistive value drift of ΔR/R < 0.2 % are possible at any practical relevant relative humididy level and environmental temperatures < 100°C, without any problems for this very reliable resistor type (dependent on the activation energy of the functional thin film layer and diffusion properties of the applied coating “Lacquer 1”).

Practical application
Determining the reliability and health prognosis of electronic components becomes easy and cost effective when our ln√t – 1/T diagram is applicable.

In addition, only five reliably achieved, relevant measurement points are needed to define the drift and degradation (health prognosis) of components’ material properties (activation energy of lacquer/mold or functional layer, coefficient of diffusion, acceleration factors, etc.) over the whole relevant temperature-humidity-time expanse for all practical applications, as shown in Figure 5. 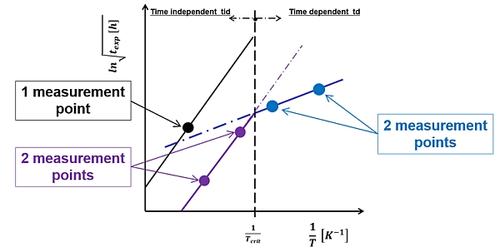 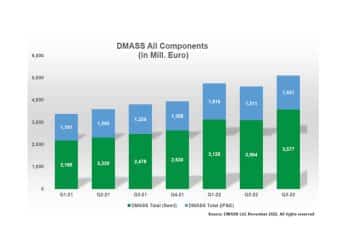