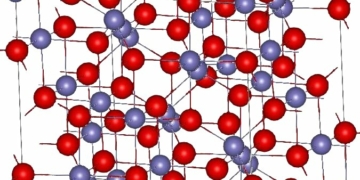 Stretching a Metal Into an Insulator

Stretching a Metal Into an Insulator 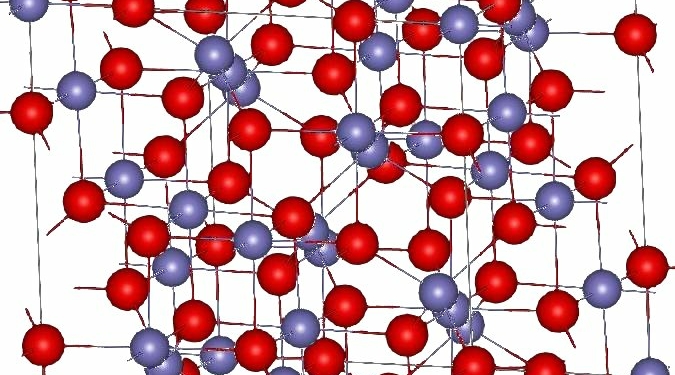 To create materials for new energy applications, scientists use heat and strain to remove oxygen atoms. However, stretching a well-ordered, thin film of strontium cobaltite lets the oxygen atoms move more freely through channels. The motion increases the escape of oxygen, and thus increases the number of vacancies. Impressively, the team created the strain-induced oxygen vacancies at temperatures as low as 300 °C, which is lower than previously possible, and in environments that usually decrease oxygen vacancies. Further, this higher vacancy concentration converted a metal into an insulator.

Precise tailoring of material properties with strain (through changes in the oxygen vacancy concentration) is a new method to control magnetic, electronic, and catalytic properties in transition metal oxides for emerging energy and device technologies. The ability to decouple the oxygen vacancy concentration from its typical dependence on the operational environment is useful. Decoupling allows for effectively designing oxide materials with a specific ratio of oxygen atoms. The material used in this research is an oxygen “sponge.” It has enhanced catalytic activity for turning carbon monoxide into carbon dioxide at temperatures useful for rechargeable batteries, fuel cells, and more.

Stretching or compressing a material creates strain that can be a powerful tool to control oxygen vacancy concentration, as opposed to traditional methods that require adding impurities or high temperatures. Scientists led by Oak Ridge National Laboratory have used strain to tune oxygen content in epitaxial strontium cobaltite (SrCoO3-δ) thin films grown by a technique called pulsed laser epitaxy. At relatively low temperatures, as low as 300 °C, stretching the material by 2% lowered the oxygen activation barrier by roughly 30% and simultaneously reduced the oxygen enthalpy. This caused the oxygen content to decrease, creating oxygen vacancies in the crystalline structure. Previous attempts to remove oxygen at such low temperatures were not successful. To understand the experimental observation of the strong coupling between strain and oxygen stoichiometry, the team performed first-principles density functional theory calculations. Specifically, computing the energies for moving an oxygen atom into one of the vacancy sites (enthalpy) and for diffusion of the oxygen atoms from one vacancy site to another in the open network structure were keys to predicting the ground state and transport properties. These calculations showed that stretching decreased the energetic stability of the oxygen atoms in the crystalline structure, allowing for increased mobility of oxygen atoms at lower temperatures than previously possible. In contrast, compression increased the stability of oxygen atoms, immobilizing them. Stretching at these low temperatures and even in environments that usually introduce oxygen into materials (oxidizing environments) decreased oxygen concentration and increased the number of oxygen vacancies. These strain-induced defects resulted in a change of the materials’ electronic properties, from a ferromagnetic metal to an antiferromagnetic insulator, with increasing strain. The research shows that strain can be used as a knob for fine tuning of oxygen concentrations, allowing the control of the materials’ magnetic, electronic, and catalytic properties without conventional cationic dopants. The results will have immediate benefits in improving ionic conduction in solar oxide fuel cells and developing high-performance oxygen sensors and membranes.

This work was supported by the U.S. Department of Energy (DOE), Office of Science, Basic Energy Sciences, Materials Science and Engineering Division, and included research at the Advanced Photon Source, a DOE Office of Science user facility.