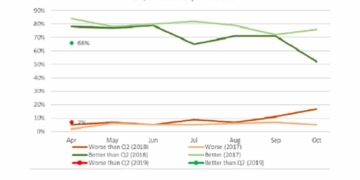 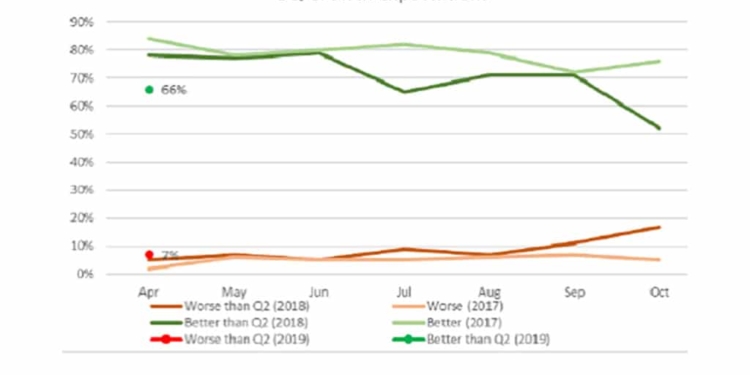 by Industry experts polled in April were slightly more optimistic about electronic component demand, bookings and order cancellations than they were in March. Of roughly 20,000 global respondents to Technology Partners Consultants’ April survey, 29 percent expect a better Q2, versus 23 percent the prior month.

“Based on our survey results and conversations with various supply chain [managers]; we believe the industry is close to if not at a bottom,” TPC said. “However, inventories in some channels are still viewed as too high.”

“However, our initial C3Q results show only 22 percent expecting bookings to increase,” TPC added, “while 13 percent expect them to be weaker versus Q2.”

Cancellation expectations — an indicator that has been quite negative over the past few months — is starting to show a positive shift. The balance of inventory and demand is starting to normalize — a trend that was confirmed by a second research firm.

However, the second firm found that double-ordering has caught up with the industry and TPC reports inventory continues to increase. In Q1, 49 percent of respondents said inventories were increasing while only 6 percent saw inventories decreasing. For Q2, both the increasing and decreasing responses went up by 5 percent, indicating the inventory outlook for Q2 is unchanged.

TPC is looking for another month of positive improvement in Q2 and continued positive trends in Q3 to support the beginning of a turnaround. Shortages in some key component categories have significantly eased.

The passive component market is softening due to lower demand from the automotive and smartphone market, one research firm found. Lead times for MLCCs have relaxed to 12 to 24 weeks for small case size devices depending on the manufacturer. Yageo, for example, can support demand in 12 to 16 weeks.

However, large case size MLCCs are still under tight supply because Murata and TDK have discontinued these products. Prices in Q1 became more stable, the researcher said, after the fluctuations in 2018.

Neither research firm professes to have a bead on Q3. Electronic distributors identified a drop in bookings for all components, mostly in Asia, at about 8 percent for Q4 2018 and 10 percent to 15 percent for Q1 2019. TPC said the macro environment in the Asia-Pacific region remains a concern, particularly in China.

All eyes are on Huawei, according to one report, as the telecommunications industry gears up for 5G. Huawei is a major supplier of networking equipment worldwide. Due to security concerns, the U.S. has prohibited the sale of Huawei products in certain markets and is encouraging foreign allies to follow suit. The global deployment of 5G might be delayed if Huawei is unable to play in foreign markets.

If 5G launches as expected, late in Q2 or early Q3, there could be another component shortage, one researcher said. “The demands on small-size components for 5G smartphones, and the demands on large-size and high-voltage components for 5G base-stations and infrastructure, will cause additional strain on already-tight supplies for 0603-size-and-up passive components. We expect to see ongoing issues for these components that are likely to be even worse than what we saw in 2018.”