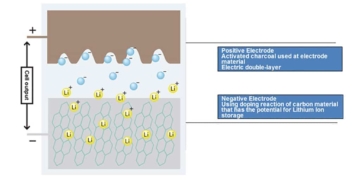 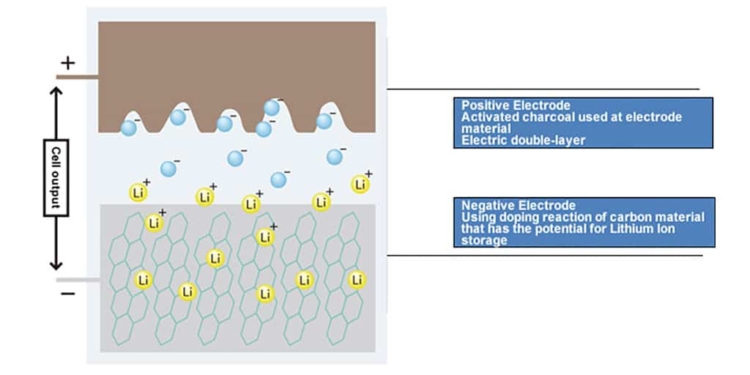 By Steve Bush. Taiyo Yuden to offer ‘lithium ion capacitors’ – devices that combine super-capacitor and lithium ion storage to create a component with twice the storage capacity of its own super-caps, a 3.8V terminal potential, and long cycle life – although the latter only if it is never discharged below 2.2V.

“It has superlative safety characteristics,” said Taiyo. “Since the amount of self discharge is small, self-ignition becomes extremely unlikely.”

Lithium Ion Capacitors are a type of asymmetric capacitor, where the positive and negative electrodes use different principles.

“Compared to existing capacitors, the energy density is high, a large reason for this is the fact that the static electricity capacity of the negative electrode is increased by pre-doping,” said the firm – also pointing out that this means the capacitors arrive pre-charged, and capable of delivering high currents into accidental short circuits.

Really, never discharge below 2.2V
The company has created a comprehensive application note (Notes on circuit design for lithium ion capacitor), and one warning entry reads: “Do not use the product at voltages below the lower limit voltage (2.2V). It may generate gas, causing it to leak, heat up, smoke, explode, or burst into flames. Take due care when designing circuits so that the voltage never falls below the lower limit voltage.”

On the plus side, unlike Li-ion batteries, penetration of the cell is unlikely to cause a fire. According to Taiyo Yuden: “The constituent materials do not contain oxygen, and the chemical reactions that would give rise to thermal runaway cannot occur solely based on Joule heating from the accumulated electrical charge. That means that energy is lost together with the release of electrical charge, and there is no danger of ignition.”

Test results for nail penetration – sideways through the cell – are: no explosion or ignition, and no opening or bulging of the safety valve. Cell surface did reach ~110°C after around two minutes.

According to product developer Mr Ishida (right), the firm had two use cases in mind Li-ion caps: “The first was to use the high power density to develop a high-volume capacitor for use in energy recovery, or as a back up, for automobiles and industrial machinery The other aim was to develop a low-volume capacitor, that could be used in consumer devices such as smartphones, tablets, mobile phones, digital cameras and PC’s.”

Most of the uses seen so far, according to the firm, is as back-up for rechargeable batteries, delivering high instantaneous power while the battery provides high capacity. Medical appliances is one application, where even momentary voltage drops can be critical. Automotive energy recovery is foreseen, as well as energy recovery in lifts (elevators). “In addition, lithium ion capacitors have started to be used by themselves in a stand alone role instead of rechargeable batteries in some applications,” said the firm.