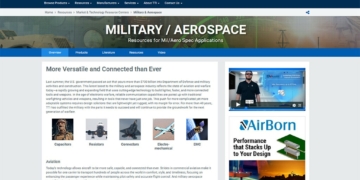 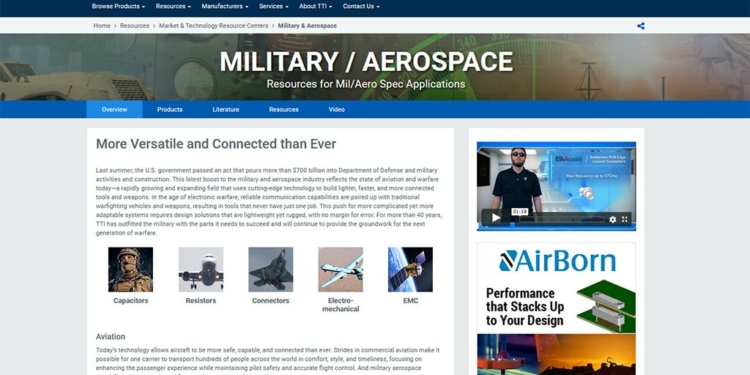 Fort Worth, Texas – July 19, 2019 – TTI, Inc., a leading specialty distributor of electronic components announced the company has a new central hub for market updates and product information on mil/aero technology.

More Versatile and Connected than Ever

Last summer, the U.S. government passed an act that pours more than $700 billion into Department of Defense and military activities and construction. This latest boost to the military and aerospace industry reflects the state of aviation and warfare today—a rapidly growing and expanding field that uses cutting-edge technology to build lighter, faster, and more connected tools and weapons. In the age of electronic warfare, reliable communication capabilities are paired up with traditional warfighting vehicles and weapons, resulting in tools that never have just one job. This push for more complicated yet more adaptable systems requires design solutions that are lightweight yet rugged, with no margin for error. For more than 40 years, TTI has outfitted the military with the parts it needs to succeed and will continue to provide the groundwork for the next generation of warfare.

Today’s technology allows aircraft to be more safe, capable, and connected than ever. Strides in commercial aviation make it possible for one carrier to transport hundreds of people across the world in comfort, style, and timeliness, focusing on enhancing the passenger experience while maintaining pilot safety and accurate flight control. And military aerospace capabilities have been honed for speed, accuracy, and innovation.

To support these advances in technology, aviation components are becoming smaller and more lightweight, with the ability to support high bandwidth and density while maintaining signal integrity. Products must also be able to sustain extreme temperature and weather ranges while enduring heavy vibrations, pressure, and electromagnetic interference. And when it comes to connectivity, both commercial and military aviation applications are moving away from traditional protocols and towards Ethernet connections to support faster, more reliable operations.

Originally used by the military for dull, dirty, or dangerous missions, unmanned aerial vehicles today conduct a wide variety of military applications. From warfighting and combat missions to surveillance and data-gathering functions, UAVs are rapidly becoming an indispensable part of warfare operations.

Size matters, too, whether it’s a GPS-guided UAV with a 60-foot wingspan or a radio-controlled drone the size of a hummingbird. The growing use of nano-UAVs—which are small enough to be attached to a soldier’s utility belt and used for monitoring and situational awareness—means connectors and cable must be optimized to reduce size, weight, and power. The ability to repair components in the field is valuable, as well. UAV capabilities and needs will continue to evolve rapidly due to ever-changing technology and threats, and the market must evolve with them.

It’s been more than 40 years since man started exploring space, and today the final frontier feels closer than ever. TTI provides components critical to sending vehicles into space, enabling the careful positioning of solar rays or robotic arms during a mission, or conducting successful deep-space probes that can last for years. Rugged interconnects and cables play a crucial role in mission-critical space applications. All components must withstand extreme environments and operate through launching, space flight, and landing, as well as meet the standards of NASA and other major space agencies. Rigorous testing, including data transmission simulations, vector network analyzation, in-circuit probing testing, and out-gassing regulations, is conducted on all space technology components. Every ounce matters when it comes to launching a vehicle into space—a lighter payload means an easier liftoff and a more efficient mission. Power conservation is critical as well, so power connectors and cables must operate with lower resistance and less bulk.

Offshore and subsea environments pose some of the most extreme pressure, weight, and corrosion challenges to power, communications, network, and electronic systems. Whether it’s rugged ground vehicles taking troops to and from missions or naval vessels on months-long patrols, military-grade vehicles are crucial for combatant operations, transportation, and protection. Advanced solutions include support for navigation, safety systems, power train, and infotainment, as well as body electronics. And specialty vehicles need specialty solutions that are built for speed, reliability, and efficiency. Armored vehicles require sensors that can handle process-intensive target acquisition, as well as optimize and control weapons systems, with no margin for error. For towing vessels, tough and low-rotation cables are needed to support towing requirements in harsh environments—sometimes at depths of up to 6,000 meters.

As the military moves towards more network-centric warfare, vehicles and vessels are equipped with state-of-the-art integrated command communications systems, which are critical during missions. Along with advanced connections comes the need for high-speed components that meet the need for military environments—they should be lightweight but able to withstand extreme environments. And electronics must be able to perform in many situations, with the ability to interface between marine applications, aircraft, drones, military personnel, and land vehicles.

In warfare, the flow of information can make or break a mission, produce situational awareness, and provide actionable details that can give warfighters the upper hand. Command, Control, Communications, Computer, Intelligence, Surveillance, and Reconnaissance–better known as C4ISR–has been an important part of the military for decades, but today’s technology brings it to the forefront of the battlefield. The U.S. military has recently launched new initiatives to focus on the research and development of electronic warfare components, including open architecture technologies.

Today’s battlefield weapons are multifunctional, efficient, and ever-evolving—just recently, U.S. military branches have launched efforts to expand the capabilities of futuristic weapons, including hypersonic weapons and high-energy lasers that can be used for anything from shooting down UAVs and manned reconnaissance vessels to collecting intelligence and surveillance. As always, the race is on to hone weapons systems to be more versatile and transportable—lasers, for example, have been used in warfare for years but only recently are able to function on light tactical combat vehicles.

A modular approach is crucial for today’s components, so they can power weapons systems wherever they’re needed most, whether that’s hurtling through the air or via mobile rocket launcher. Components must be deadly accurate and well-connected, providing location and reliable directional control during deployment. And connectors must be compact, rugged, and versatile to accommodate next-generation tactical weapons.