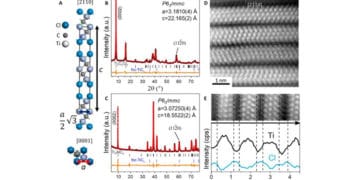 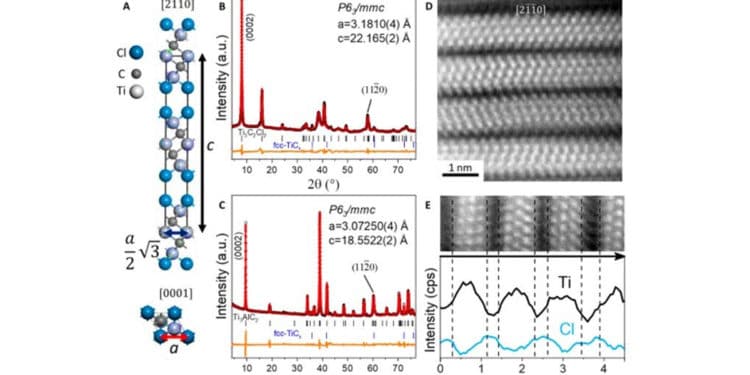 Structure of Ti3C2Cl2 MXene. (A) The structure of Ti3C2Cl2 MXene can be approximated using P63/mmc space group with the two lattice parameters: in-plane, a, and out of plane, c. Experimental XRD patterns (Cu Kα, reflection, black curve), Le Bail fits (red curve) and the corresponding residues (orange curves) of (B) Ti3C2Cl2 MXene derived from (C) Ti3AlC2 MAX phase.The successful MXene synthesis can be visualized from the shift of (0002) and (112̅0) peaks to lower angles compared to that of the parent MAX phase. In the direct space these changes are reflected by the increase of both a and c lattice parameters. Initial Ti3AlC2 MAX phase contains small amounts of bulk fcc-TiCx (Fm-3m space group) impurity which propagates into the final MXene product. (D) Atomic-column resolved HAADF image of Ti3C2Cl2 MXene. The electron beam is parallel to [21̅1̅0] zone axis. (E) The EDX elemental line scans of Ti3C2Cl2 MXene using Ti Kα and Cl Kα suggest presence of Cl surface groups on each Ti3C2 sheet. Due to their low Z contrast, C atoms could not be observed. Credit: Science Advances, doi: 10.1126/science.aba8311

Surface functional groups in two dimensional (2-D) transition-metal carbides can undergo versatile chemical transformations to facilitate a broad class of MXene materials. In a new report on Science, Vladislav Kamysbayev, and a team of scientists in chemistry, physics and nanoscale materials at the James Franck Institute, the University of Chicago and the Argonne National Laboratory in the U.S. introduced a general strategy to synthesize MXenes.

Scientists have studied MXenes for applications in supercapacitors, batteries, electromagnetic interference shielding and composites. The substrates can be typically synthesized from corresponding MAX phases where M stands for the transition metal, X stands for carbon or nitrogen, by selectively etching the main group element A, which can include aluminum (Al), gallium (Ga), silicon (Si) and other elements.

Researchers typically perform etching in aqueous hydrogen fluoride (HF) solutions that render MXenes with a mixture of fluoride (F), oxygen (O) and hydroxide (OH) functional groups, commonly denoted as Tx. The functional groups can also be chemically modified, unlike the surfaces of other 2-D materials such as graphene and transition dichalcogenides.

Previous research had shown that selective terminations of MXenes with different surface groups can lead to remarkable properties, including tunable work functions and 2-D ferromagnetism. Covalent functionalization of the substrate will lead to uncover new directions to rationally engineer 2-D functional materials.

The process allowed unprecedented control across the surface chemistry, structure and properties of MXene materials. Chloride and bromide-based MXenes with labile (easy to alter) surface bonding acted as versatile synthons for additional chemical transformations. The MXene surface exchange reactions required temperatures of 300 degrees Celsius to 600 degrees Celsius, which are difficult to achieve through traditional solvents. The team therefore used molten alkali metal halides in solvents with unmatched high-temperature stability and high solubility. For example, halogenated MXenes such as Ti3C2Br2 dispersed in alkali halides such as caesium bromide, potassium bromide or lithium bromide (CsBr/KBr/LiBr) could react with dilithium telluride (Li2Te) and lithium sulfide (Li2S) to form MXenes with a telluride or sulfide-based group.

Kamysbayev et al. then synthesized Ti2CCl2, Ti2CBr2, and Nb2CCl2 (denoted in brief as chloride-MXenes and bromide-MXenes) based on similar covalent surface modifications. They performed surface exchange reactions on the MXenes to demonstrate the intact 2-D sheets during all stages of transformation. For example, during reactions of bromide-MXenes with lithium hydride at 300 degrees Celsius, the team produced bare MXenes with vacancy sites and described the process as a reductive-elimination of the hydride groups.

Chemical transformations of solids are typically impeded by slow diffusion to severely limit the scope of synthesizing solid-state compounds, therefore completely exchanging the surface groups in stacked MXenes was a kinetically cumbersome process.

To understand the material reactivity, the scientists followed the evolution of surface exchange reactions using Ti3C2Cl2 sheets. Unstacking the MXene sheets in molten salts greatly assisted the diffusion of ions to make MXene surfaces sterically accessible. The van der Waals (vdW) radii and packing density of surface atoms in the material had a huge effect on the lattice constant denoted a. The work showed how the composition and structure of MXenes could be engineered with unprecedented versatility, while chemical functionalization of MXenes affected nearly every property of the materials and influenced the nature of electronic transport in MXenes. Above a temperature of 30 K, the MAX phase and MXene samples showed similar specific resistivity, which decreased on cooling the sample. The team associated the temperature dependence with conductivity and a metallic state.

The oxo-terminated MXenes showed the highest-resistivity, while the seleno- terminated MXene showed the lowest resistivity. In this way, the surface groups were not mere spectators but active contributors to MXene superconductivity, affecting biaxial strain, phonon frequencies and the strength of electron-phonon coupling in the material.

The MXene exchange reactions represent an exciting counter-example to the traditional view of solids that are generally considered hard to modify post-synthesis. Using extensive characterization studies, Vladislav Kamysbayev and colleagues showed how chemical bonds inside an extended MXene stack could be designed rationally to form a broad class of functional materials.