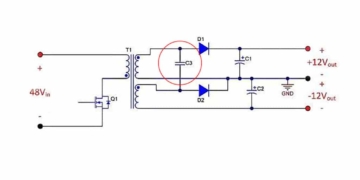 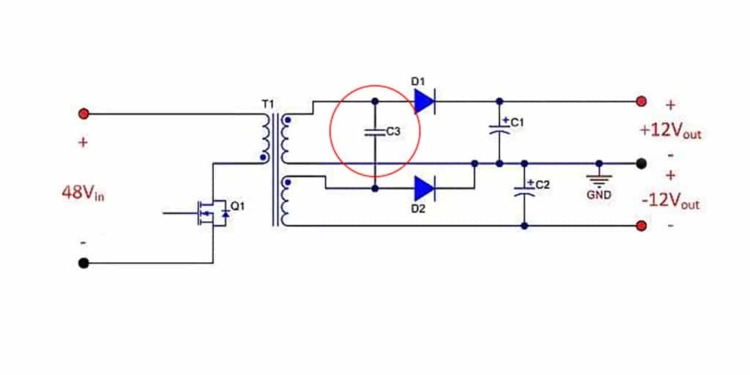 by Brian King, an applications engineer in the Texas Instruments Power group and a Senior Member of the Technical Staff. Power Tips #85: Systems that require multiple output voltages typically employ flyback converters. In these multiple-output flyback converters, maintaining good regulation simultaneously on all output voltages is a big challenge.Power Tips #78 explored how using synchronous rectifiers can improve cross-regulation between output voltages. The synchronous rectifiers balance the output voltages, but the trade-off is higher root-mean-square (RMS) current in the windings and decreased efficiency at light loads. In this power tip, I’ll continue the discussion by looking at a special case that generates positive/negative outputs of the same magnitude. In this situation, proper placement of a single capacitor can improve cross-regulation across all loading conditions.

Figure 1A shows a simplified schematic of a 48-V to ±12-V supply in its normal configuration. To implement the technique proposed here, you must first shuffle the secondary connections around a little, as shown in Figure 1B, by adding capacitor C3 and moving diode D2 from the low side of the secondary winding to the high side. Also, notice that the two transformer secondary windings no longer share a common connection. Other than the added capacitor, C3, Figure 1B is electrically equivalent to Figure 1A.

Figure 1 Typical configuration of dual-output flyback supplies (A); reconfiguring and adding a capacitor as shown improves cross-regulation (B).

Figure 2A shows the state of the circuit when Q1 is off and both D1 and D2 are conducting. During this state, the transformer delivers energy to both outputs through the secondary windings. Notice that C3 is connected in parallel with the +12-V output, and thus charges to the same voltage level.

Figure 2B shows the state of the circuit when Q1 is on and both D1 and D2 are reverse-biased and in the off state. During this state, energy is being stored magnetically in the transformer as the primary winding charges from the input voltage. In this state, as long as both secondary windings have the same number of turns, the voltage across C3 is equal to the magnitude of the −12-V output, as described by the equation shown in Figure 2B. As the circuit alternates between these two states, capacitor C3 acts as a charge pump, helping keep the magnitude of both output voltages balanced. This charge-pump effect compensates for voltage imbalances caused by parasitic elements in the circuit. If the two secondary windings have a different number of turns, this technique will not work.

Figure 4 shows the voltage and current waveforms in the output diodes when loading the +12-V output with 1 A and the −12-V output with 10 mA. Adding the 1-µF capacitor C3 not only keeps the two outputs well-coupled, but also filters the effects of the voltage pedestal caused by the leakage on the primary winding. Notice the small oscillation on the diode voltage of the more lightly loaded −12-V output. This oscillation is caused by leakage inductances resonating with capacitor C3, and results in a phase shift in the conduction of the −12-V output diode. The current waveform shapes are interesting in that the −12-V current maintains a triangular shape, which subtracts from the +12-V secondary winding current.

Figure 4 Voltage and current waveforms on the output diodes, with the +12-V output loaded at 1 A and the -12 V loaded at 10 mA

The graph of Figure 5 shows the regulation impacts of adding the capacitor. Here, simulations are plotted with different loading conditions on the two outputs, both with and without the added capacitor.

Without the capacitor, the −12-V output voltage rises significantly, as the −12-V load decreases toward zero. With the capacitor, both outputs track each other within 3% across the entire load range. These results are similar to those obtained by using synchronous rectifiers, as detailed in Power Tips #78, but without the penalty of increased RMS winding currents, and with very little added cost or complexity.

The next time you are designing a dual-output power supply, consider implementing this simple technique to improve the performance of your design.