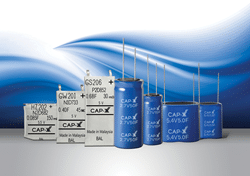 The cylindrical line was developed to address a broader range of the market. Anthony Kongats, CAP-XX CEO, explained that customers had been asking for an alternative form factor at a lower price point.

Single-cell (2.7V) or dual-cell (5.4V) cylindrical supercapacitors deliver high peak pulse power and low ESR at a competitive cost, ranging from less than US$0.50 for the smallest devices (one to five Farads) to US$9 for the largest (400 Farads).

The temperature range is -40°C to +65°C. Assembly is by soldering or welding (ultrasonic, laser or spot), via radial lead, solder pin or tab.

Availability:
Samples will be available in March with production scheduled to start in second quarter of 2017.