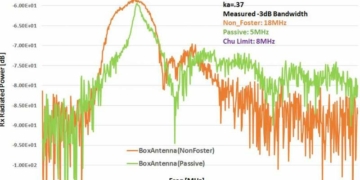 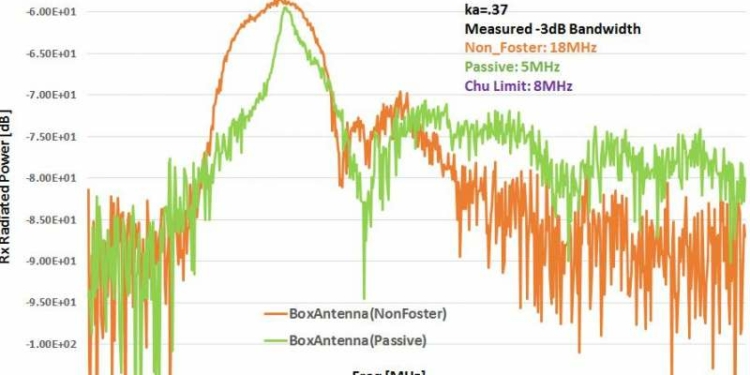 Chu’s Limit, a fundamental principle of electromagnetics, dictates that the bandwidth an antenna can function in has a maximum level proportional to the physical size of the antenna—the smaller the antenna, the smaller the bandwidth, the slower and less capable the communications link. Justin Church, used non-Foster circuits embedded in an electrically small antenna to produce the first experimentally measured instance of exceeding the Limit by negatively charged capacitors and inductors.

Chu’s Limit has been a foundational law of antenna and telecommunications research since its introduction in the late 1940s, but a scientist at the Space and Naval Warfare Systems Center Pacific (SSC Pacific) has recently, for the first time, exceeded Chu’s Limit in a measured experiment.

Justin Church, an engineer in the Center’s applied electromagnetics group, used non-Foster circuits embedded in an electrically small antenna to produce the first experimentally measured instance of exceeding the Limit. Several papers have theorized or simulated such a possibility, but Church is the first to demonstrate an antenna capable of using bandwidths that exceed this fundamental limit.

He was able to achieve this thanks to two novel advances: non-Foster circuits and internal matching. Non-Foster circuits are active, transistorized circuits that effectively create capacitors and inductors that are negatively charged, meaning the reactance is inverted to that of conventional capacitors and inductors. Coupling this technique with internal matching—embedding the antenna and circuit into one structure—allowed the electrically small antenna to achieve a broader bandwidth, while not sacrificing efficiency. An electrically small antenna is one in which the largest dimension of the structure is less than one-tenth of a wavelength. Most electrically small antennas have less than 1 percent efficiency, but Church was able to achieve an efficiency of 85 percent.

Church experimentally verified an instantaneous bandwidth of 18 Megahertz from an internally matched, non-Foster integrated antenna that had a physical volume less than one-tenth the operational wavelength. This measured bandwidth exceeds the Chu limit by 2.5 times.

Aside from the scientific importance of achieving this previous impossibility, this is an important area of research for the Navy, and will have far reaching impacts on the warfighter.

“A lot of the communication bands the military is interested in using are often at low frequencies—very high frequency (VHF) and ultra-high frequency (UHF). Here, the wavelengths are quite long—over a meter or more—and at these frequencies the wave travels a long distance,” Church explained. “The challenge is, in order for an antenna to operate efficiently at those frequencies, it has to be physically large, often on a scale of several meters.”

This is a challenge for those tasked with executing Navy missions, where smaller, portable antennas are much more effective and covert.

“There’s a big push, and always a need for the military to research how small you can make antennas and have them operate as efficiently as large ones,” Church said. “Antennas that are compact allow for greater operational capabilities.”