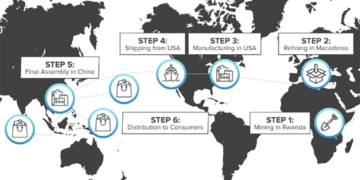 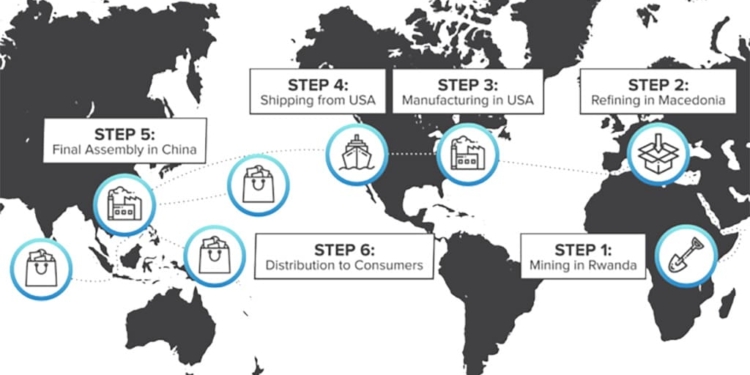 The African country of Rwanda is the world’s biggest supplier of tantalum: a rare mineral used to make capacitors found in devices like smartphones and laptops. Goal of the project is to prove beyond doubt that every bag of tantalum ore from Rwanda was mined, transported, and processed under OECD-approved conditions, without any child or slave labor.
Approach

Created by UK-based Circulor, the blockchain-based system to trace tantalum went live in three mines and an ore-sorting facility in Rwanda in fall 2018.

The system is designed to slash today’s high cost for compliance, satisfy regulators, reassure consumers, and build revenues for Rwanda.

If you’re like most people, you’ve never heard of tantalum—but you probably have some in your pocket or purse right now.
Tantalum is a rare mineral essential for making capacitors for devices like smartphones and laptops.

A small region of Africa produces 60% of the world’s supply, with Rwanda as the main exporter. But tantalum was sometimes smuggled in from conflict-ridden Congo, where it was mined by children or workers enslaved by warlords.

This led the OECD, U.S., and EU to name tantalum a “conflict mineral” and pass regulations to improve its traceability. Among them are the U.S. Dodd-Frank Act of 2010 and the upcoming EU Conflict Minerals law. Despite these rules, no one had a foolproof way to prove where tantalum actually came from. Until now.

UK-based Circulor created a system that ensures tantalum is mined, transported, and processed under approved conditions with an unbroken chain of custody. Powered by a permissioned blockchain built on Hyperledger Fabric, the system uses facial recognition and QR codes to deliver a world first: mine-to-manufacturer traceability of this vital resource.

When he was approached by a mining company in 2016, Circulor CEO and co-founder Doug Johnson-Poensgen had never heard of tantalum himself. But he soon learned everyone from miners in Africa to electric car makers in California has a stake in the mineral.

For example, consumers don’t want their purchases to support slave labor. Developing countries don’t want their exports tainted and export revenues diminished. Consumer electronics makers want to report their supply chains are clear. But African mining companies don’t want to pay all the costs of compliance by themselves.

At the time, Rwandan mines were already using the best tracing methods available: tagging materials and filling in paper forms. This met the letter of the OECD rules but didn’t provide actual traceability. It generated a costly mountain of paper with room for errors or fraud.

Circulor’s team started by mapping every step of the supply chain for tantalum from mine to manufacturer. They realized a blockchain could streamline those steps, but they faced the classic problem of “garbage in, garbage out.”

“A blockchain will record an immutable record of custody of a material, the locations it’s traveled through, its composition over time, and all that,” says Circulor’s Johnson-Poensgen. “But if you’re trying to make sure the wrong material never enters the system in the first place, you need processes to make this work.”

You need to tightly control the raw material on the ground to provide accurate data for the blockchain.

After the supply chain was mapped, out went the paper checklists and in came new online procedures. With scanners, sensors, weigh scales, and smartphones, these generate reliable data at each step of the global supply chain.

Tantalum goes through many transformations: from gray pebbles, it’s refined to a powder, and then formed into capacitors that are glued to circuit boards and popped into smartphones, laptops, and even electric cars.

“This isn’t a simple track and trace. It’s complicated, because we start with ore and end up with smartphones,” notes Johnson-Poensgen. “Food traceability is much simpler. A banana doesn’t change into a diamond halfway through its journey to a consumer.”

The Circulor team wanted a tamper-proof blockchain as the secure repository for all the system data, but it had to be easy to use by anyone with a smartphone.

To meet these challenges, Circulor created some unique procedures, including the facial recognition system they call URU. The results of each scan are recorded on the blockchain.
And Circulor tracks the ore from mine through refinery with smart contracts.

“The Circulor Protocol is the family of smart contracts that connect one segment of the supply chain to another through a material-processing step,” explains Johnson-Poensgen. “It’s the glue that hold all the different steps together.

“Our system provides both chain of custody and tracing of materials,” he says. “The aim is to use blockchain technology to drive out costs as well as dramatically improve traceability.”

This means manufacturers like Apple and HP will finally have all the proof they need to report to regulators with confidence and to label their products “conflict-free” for consumers.

“Regulations are one thing. The problem was, no one had a foolproof way to prove where their tantalum came from. Until now.”

Everyone entering a mine or selling a bag of ore has their photo taken and ID card scanned with a smartphone. The photos must match the image on file in the Circulor facial recognition system.

Bags of ore are grouped into 70-kg (150-pound) sacks, each with a tamper-proof QR or NFC tag attached. Using GPS, the tags show exactly where that sack comes from. Tags are scanned as sacks are shipped to Kigali, the capital of Rwanda, and on to refineries.

Sacks of ore are weighed before being mixed together. After the ore is refined into powder, the output must equal the weight of the input in a mass balance check.

The refined ore is sealed into trackable containers scanned with a smartphone every time they’re loaded or unloaded from ships or trucks.

The refined tantalum is shipped to a manufacturer. Again, the inputs to each step are weighed and compared with the outputs. Finished batches of capacitors are tagged with GPS or RFID tags.

Tagged batches of capacitors are scanned with smartphones throughout their journey. Each movement is recorded on the blockchain.

Capacitors are glued onto circuit boards assembled into final products. Each product receives a unique serial number. Third-party logistics systems certify the product’s origin, provenance, and ethical sourcing, all recorded on the blockchain.

Finished products are shipped to distribution points for consumers around the world. The serial number can be used to trace the materials that went into that product.