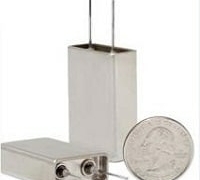 Cornell Dubilier: Why Military and Aerospace Designers Are Turning to Aluminum Electrolytic Capacitors

Cornell Dubilier: Why Military and Aerospace Designers Are Turning to Aluminum Electrolytic Capacitors 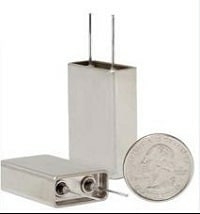 Early conventional aluminum electrolytic capacitors were known to lose electrolyte over time through outgassing. The loss of electrolyte, called dry-out, results in loss of capacitance and increases in ESR. Modern packaging technology has resulted in commercially available parts with improved seals as compared with the electrolytic types of yesteryear, but even the newer components lose some electrolyte over time and concerns about dry-out persist today.

Military and aerospace engineers are integrating COTS parts where appropriate but tend to favor electrolytic capacitors with tight seals and true hermetic capacitors, including hermetic wet tantalum capacitors, for their mission critical applications. Cornell Dubilier’s Flatpack aluminum electrolytic capacitors have made inroads into military and aerospace applications, largely due to their highly reliable seals, long life and space-saving, flat form factor. Over the past two decades they have been used extensively in power supplies for military and commercial aircraft, as well as ground-based and ship-board radar systems.

About one year ago, Cornell Dubilier introduced a hermetically sealed aluminum electrolytic capacitor called the MLSH Slimpack, which offers a true glass-to-metal seal housed in a stainless steel case that results in no electrolyte loss and no dry-out. With stainless steel cases and welded seals, these capacitors (measuring 1.0 x 1.5 x 0.5 in.) are built to withstand the challenging environments of military and aerospace applications.

Figure 2. The graph compares the weight loss of electrolyte over time for a non-hermetic Flatpack versus a hermetically sealed MLSH Slimpack. Although the weight loss for non-hermetic Flatpack capacitors is minuscule, as indicated by the orange curve, the blue line on the graph shows that the hermetically sealed MLSH Slimpack has not lost electrolyte over time on test. Source: Cornell Dubilier

With the concern for dry-out addressed, aerospace and military designers are taking advantage of the benefits of the Hermetic Slimpack aluminum electrolytic capacitors. One of the most striking advantages of aluminum electrolytic capacitor technology versus wet tantalum is its superior capacitance retention at low temperatures. Most military aerospace electronics circuits must be designed to operate at -55° C. Wet tantalum capacitors have poor capacitance retention at low temperatures, making it necessary for the design engineer to integrate more wet tantalum capacitors in parallel just to meet the minimum capacitance required at -55° C. Circuit designs that use a single component versus multiple components offer greater reliability as there is less risk of failure when fewer components and connection points are relied upon.

Hermetic Slimpack capacitors are made as every bit robust as their wet tantalum counterparts. These devices can handle up to 80 G of vibration, withstand altitudes of 80,000 ft. and offer exceedingly long life of 5000 hours at 125° C without de-rating for voltage. Standard ratings for the MLSH Hermetic Slimpack range from 220 µF to 24,000 µF in 30 Vdc to 250 Vdc at their full-rated temperature of 125° C.

Looking Toward the Future

While the new technology is not a drop-in replacement for multiple wet tantalum capacitors (although it can’t be ruled out), the next generation of military and aerospace designs focused on aircraft and equipment two to three years down the road might well reap the benefits of these rugged components. As more designers learn about the benefits of the technology, there may be a sea change where these discrete components become the preferred option in the design of future aircraft, military equipment or even spacecraft.

Cornell Dubilier has not specifically aimed its Slimpack aluminum electrolytic capacitors at the space market, but the company knows that the devices can withstand the harsh conditions of space. However, they require more energy density than what is currently offered. As of yet, Cornell Dubilier has not released a standard product for space, but the company is exploring the option for future iterations of spacecraft and satellites.

Cornell Dubilier has a variety of options to choose from when selecting a hermetically sealed aluminum electrolytic capacitor for your next-generation aerospace or military designs. For more than 20 years, the company has been in the business of delivering these capacitors to market and with its latest innovation, designers no longer need to fear dry-out occurring while receiving the additional functionality that these discrete components bring to the table.