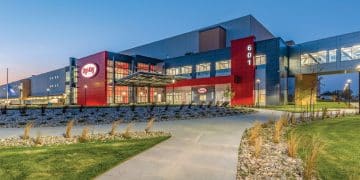 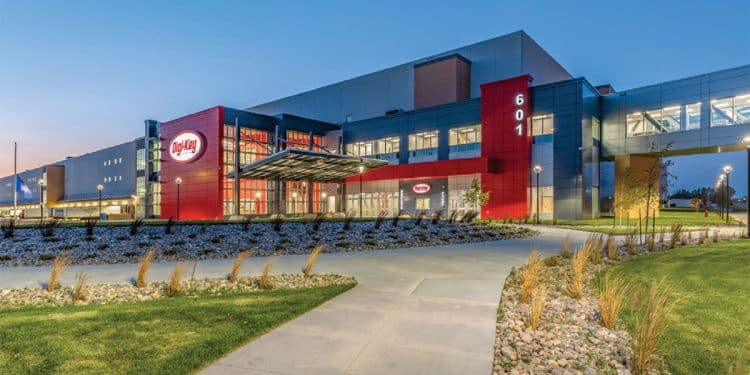 Digi-Key celebrates ribbon cutting of its US product distribution center expansion. The 2.2 million square foot facility makes Digi-Key one of the 10 largest warehouses in North America.

Digi-Key Electronics, which offers the world’s largest selection of electronic components and automation products in stock for immediate shipment, celebrated the ribbon cutting of its Product Distribution Center expansion (PDCe) today, expanding the company’s headquarters’ footprint by 2.2 million square feet for a combined total of more than 3 million square feet. The new facility allows Digi-Key to pick, pack and ship nearly three times the previous daily average of 27,000 packages to customers in more than 180 countries around the world.

“This is a significant milestone for all Digi-Key employees and our community,” said Dave Doherty, president of Digi-Key. “Our new product distribution center expansion will help us continue to deliver excellence to our customers for many years to come. As exciting as this expansion is for us, our hope is that our customers truly don’t notice a difference – the transition for them should be seamless, and if anything, result in an even better customer service experience than they are already accustomed to. For us, it’s deeper roots in Thief River Falls and a commitment to continue investing in this community and the state of Minnesota.”

The PDCe building was designed by Minnesota-based Widseth, and McShane Construction served as general contractor on the project. KNAPP, a leader in warehouse logistics and automation, partnered with Digi-Key on the internal automation and operational equipment.

The opening of the facility comes at a time of record growth for the company – Digi-Key wrapped up 2021 growing faster than ever before with a 65% growth rate, and bookings in 2022 are up more than 25% over last year. This year has also been one of the largest years for supplier additions for the company with 250 suppliers already added for the year. Since construction began in 2018, Digi-Key has added 1,500 suppliers and 1.5 million part numbers to their inventory.

The new facility is nearly fully automated, the only task that is truly done by hand is the actual picking of parts. Among the racks of components, carts are wire-guided so that the only thing a cart driver will have to worry about is where to stop. The wire-guided system will save more than 10% of time and is significantly safer.

The product distribution center expansion features two primary conveyor systems to provide redundancy in the case of a breakdown and provide opportunities for future growth. Scalability and growth were top of mind in the plans and design of the new building, and the majority of the fourth floor is currently open for the time being. There are over 27 miles of automated conveyor belt in the new facility, and an average order will travel more than 3,200 feet inside the building.

The building features six backup diesel engines and pumps along with a water tank built for fire suppression. It also has its own storm sewer and run-off ponds so as not to contribute to any flooding or storage concerns in the community.

The state-of-the-art facility features multiple common work areas and break rooms with oversized windows for optimal natural sunlight, as well as the Two Rivers Café that features a range of food options from ready-to-eat salads and wraps to burgers and paninis cooked to order. Local vendor, Las Ranitas, serves authentic Mexican options from the café a couple days per week as well. Digi-Key is recognized by the state of Minnesota as a Breastfeeding Friendly Workplace and has 16 private Mother’s Rooms throughout the PDCe for employees returning to work after parental leave. The building also has a spacious Quiet Room for employees to take their breaks, relax and recharge.

Outside of the new building there is a new Community Garden where employees can adopt a plot for the summer and plant seasonal flowers, fruits and vegetables. In the Skybridge connecting the original PDC to the PDCe building there is a “Digi-Walk” mapped out from end to end, offering a great place for employees to get in some extra steps during their breaks.

Sustainability was also considered during the planning and construction of the facility. The roof has a white membrane to reflect the sun’s heat, sensor-activated LED lights to minimize electricity usage, and a specially designed conveying system which maximizes energy usage as well as efficiency.