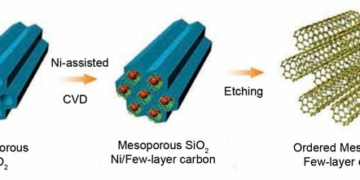 A new supercapacitor electrode material has been created by Chinese researchers that can store much more energy than conventional supercapacitors. The material, which allows an electrode to store charge in two different ways, could make supercapacitors a viable alternative to batteries.

To produce their supercapacitor, Huang’s group deposited carbon onto self-assembled silica templates, which were etched away to reveal the highly conductive material © Science/AAAS

Supercapacitors have charge capacities many times higher than traditional capacitors, which store electric charge on two plates separated by a dielectric material. They fall into two broad categories: the first, called electrical double layer capacitors, use electrolytes containing solvated ions, which are attracted to, and form, layers around the electrodes, but do not actually exchange electrons with them. These usually use porous carbon electrodes as the surface area is crucial to maximising the capacitance, but even with surface areas as large as 2000–3000 m2/g , energy storage still falls far short of that of batteries.

An alternative design of supercapacitor is sometimes called an electrochemical capacitor or pseudocapacitor, and relies on redox reactions between the electrolyte and the solvent similar to those that occur in a battery. Unlike in a traditional battery, however, the reactions are highly reversible and confined to the surface of the electrode, which makes it possible to charge and discharge much more easily. Such capacitors have used various electrode materials such as conductive polymers, but these lack the cycling stability for commercial devices.

An elegant solution to these devices’ problems is to combine the two using nitrogen-doped porous carbon, as the carbon can provide electrical double layer capacitance and the nitrogen vacancy sites can reversibly incorporate protons. However, previous electrodes using ordered mesoporous carbon have proved too resistive to provide either high capacitance or high charge capacity.

Increasing capacity
Fuqiang Huang and colleagues at the Shanghai Institute of Ceramics in China have devised a new method to produce a nitrogen-doped, graphene-like structure, by forming a template comprising long tubes from a self-assembled silica template. They deposited carbon onto the template by chemical vapour deposition using methane and ammonia before etching the template away. The degree of nitrogen-doping could be carefully controlled by varying the proportions of the gases.  The resulting structure was highly conductive.  The researchers produced electrodes from this material by pressing powders of it into an inert graphene foam.

The researchers found that the new devices could store three times more charge than current supercapacitors. The researchers believe the devices could potentially compete with batteries, perhaps even lithium-ion ones, while still charging and discharging far faster. ‘Can you imagine?’ says Huang. ‘Our device can be 100% charged in seven seconds.’ The team is now working to develop its device towards industrial application, and has devised a more industrially compatible, template-free way to produce the active material.