EESor company annonouced breakthrough results on CMBT permittivity at voltage, key energy density results achieved with 100 watt-hour/liter near-term target and independent verification of 1 Million cycle test results.
EEStor Corporation (TSX VENTURE:ESU) (“EEStor” or the “Company”) announced today that it has completed independent third party testing of its Composite Modified Barium Titanate (“CMBT”) dielectric materials at high voltage and has set preliminary energy density targets based on these results. In addition, the Company has successfully completed its one million cycle testing, the results of which are detailed below.

Ian Clifford, Founder and CEO of the Company commented: “The heart of EEStor’s technology is its patented CMBT dielectric. Independent test reports released today from MRA and Intertek show the unique performance of our dielectric at high voltages and high temperatures. These results indicate the achievement of an energy density milestone that legitimizes our ongoing work to challenge the best electrolytic and solid state electrical storage technology currently available.” Clifford continued: “Our team, led by our Chief Science Officer, Richard Weir, has been working diligently on parallel programs to effectively “unlock” the unique dielectric characteristics of our CMBT. The break-through results announced today supports that we are well on our way to achieving our goal of developing the highest performing, lowest cost, sustainable, nontoxic and environmentally responsible energy storage technology available.”

The MRA and Intertek testing reported today focus on measuring three samples of different thicknesses composed of EEStor’s densified CMBT dielectric. The reports confirm these samples have dielectric constants (K) at 500 volts of 16,000, 8,670 and 8,570 with corresponding dissipation factors (DF) of 0.008%, 0.016% and 0.01% respectively. These are extremely high dielectric constants with very low DF at voltage.

The fill factor of CMBT in the three tested samples is greater than that of the Company’s epoxy dielectric samples tested previously. Even so, the leakage currently recorded by MRA and Intertek on these high K dielectrics indicate that resistance is extremely high, confirming the effectiveness of the new binders being used for these parts.

EEStor expects to achieve even greater levels of densification in the coming weeks. Together with ongoing development of its binders, EEStor is targeting test samples with near complete densification that will have operating voltages well in excess of 3000 volts (or 40 volts per micron). Operational voltages of these magnitudes have been achieved on 70 micron layers with EEStor’s 80% fill factor CMBT epoxy system. If operational voltages of this magnitude can be maintained or exceeded in a 70 micron layer with today’s dielectric constant of 16000, EEStor will have a disruptive solid state grid energy storage solution. Such a layer would outperform lead acid batteries of similar energy densities on lifetime, depth of discharge, and power in and out.

EEStor’s previously announced Phase 4 and Phase 5 testing confirmed the development of a CMBT epoxy based technology that is disruptive to the Power Factor Correction, Power Filtering and high-voltage aluminum electrolytic markets. The comparative data is shown in the following table:

Case 1 and 2 show the volume advantage of an EEStor CMBT epoxy system in pure capacitive applications in the power factor correction market, which can be achieved today at very competitive costs to existing solutions (especially when expected lifetime and performance considerations are taken into account).

The Company’s extensive studies, which resulted in the Phase 4 and Phase 5 testing reports, are based on an epoxy/CMBT solution. Today’s reports show that EEStor’s dielectric, when densified with other binders, can now extend EEStor technology to address the grid storage market.

Testing in Phase 4 and Phase 5 also show that EEStor’s dielectric operates in the paraelectric phase between -20C and +65C. The testing today shows EEStor’s CMBT is stable at high temperatures as dielectric insulation resistance does not decrease significantly at 65 degrees C.

The paraelectric nature of the polarization mechanism is evident in: 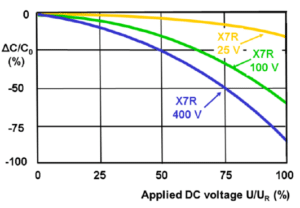 EEStor’s dielectric shows capacitance rises with temperature and is insensitive to frequency. Ferroelectric Barium Titanate capacitors lose capacitance with heat and their performance is very frequency dependent as shown: 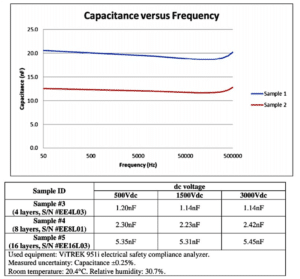 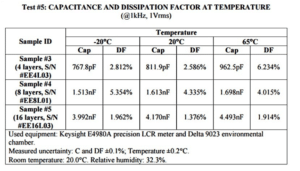 EEStor’s dielectric has been proven to be stable with frequency, temperature and DC bias:

As confirmed in MRA’s report, the million cycle test results show no degradation at over 1 million cycles, which further illustrates that EEStor CMBT does not age like ferroelectric capacitors. 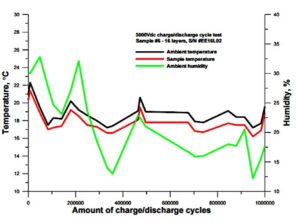 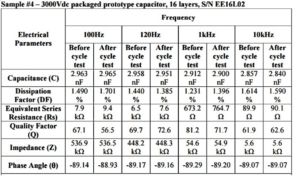 The stacking effect that is proven in Phase 4 and Phase 5 shows that EEStor’s paraelectric capacitors can be stacked in such a way as to increase capacitance and time constants. This is of significant importance to the energy storage market, as the stacking effect allows stacks to be designed for either maximum watt hours per liter or to extend time constants, depending on the application.

The following table illustrates the expected performance of a 70 micron layer of densified CMBT dielectric at various voltages, were it made with today’s independent third party verified dielectric constant of 16000 and corresponding leakage values:

Ian Clifford, Founder and CEO of the Company commented: “Achieving energy density values that begin to rival lead acid storage technology at this initial benchmarking stage of the development of our densified CMBT create an unprecedented opportunity for the Company. In 2015 the global lead acid battery market represented over USD 46 billion and is expected to reach USD 84.46 billion by 2025.1 Our technology, at the energy density numbers indicated, and with all the differentiating attributes of our solid state energy storage, could be immediately disruptive to this single vast market.” Clifford continued: “With an energy density of 100 watt hours per liter, our ability to compete against all forms of current grid storage technologies is fully realized.”

Full copies of the independent test reports prepared by MRA and Intertek have been filed and are available for viewing and download on the Company’s website at www.eestorcorp.com and on SEDAR at www.sedar.com.