Demand for semiconductors and passive components showed signs of weakening in February—a trend that is expected to last through the first half of the year.

“Based on our findings, we believe the industry has yet to see a bottom as demand and bookings continue to weaken, as well as inventories continuing to rise,” said Technology Partners Consulting.

It’s an abrupt reversal from two years of widespread component shortages and allocated inventory. Of 18,000 industry experts surveyed by TPC, 72 percent expect weaker demand in Q1 versus the end of last year. For the second quarter of 2019, 35 percent expect slower growth from Q1. About one-third of respondents see Q2 as “subseasonal,” which is significantly weaker than the previous two years.

TPC said all its metrics point to a softer market and other data is a mixed bag. The industry’s two largest electronics distributors closed calendar 2018 with record sales but noted book-to-bill ratios declined in the fourth quarter of the year. The Institute for Supply Management reported new manufacturing orders in February had slowed from the prior month; and the Semiconductor Industry Association announced global chip sales in January declined.

“We usually see [semiconductor cyclicality] three to six months later [than suppliers] which is usually an early indicator for an economic downturn too,” Michael Long, CEO of Arrow Electronics Inc., told investors in early February. “While we saw a little bit of a pause in bookings in Asia, the interesting fact that Asia is picking up again right now [means] we’re seeing things as stable.”

The SIA reported global semiconductor sales decreased 5.7 percent in January — to $35.5 billion–from $37.6 billion in January 2018. “Global semiconductor sales got off to a slow start in 2019, as year-to-year sales decreased in January for the first time since July 2016 and month-to-month sales were down across all major product categories and regional markets,” said John Neuffer, SIA president and CEO. “Following record sales over the last three years, reaching $469 billion in 2018, it seems clear the global market is experiencing a period of slower sales.”

Order cancellations are on the rise, according to the research firm; nearly half – 45 percent—of respondents said they saw more cancellations in February than in the prior month. That’s up from 42 percent in January and is a two-year high. TPC warned “it’s important to note that we saw an inflection downward in our historical data in late CY16 ahead of the demand turnaround in late CY16. We believe until the cancellation activity starts to reverse, we will not be at a bottom.”

“Typically going into a downturn for us, we would start to see a big increase in cancellation rates and we’re not seeing that,” Long said. “And so that coupled with a positive book-to-bill we’d say yes, we’re looking pretty good going out there. But as you know we forecast out one quarter at a time and if we started seeing some changes, we’ll certainly address them when we have to.”

Order cancellations may be contributing to increased inventory levels, which 41 percent of TPC respondents experienced in Q1 2019. Availability is continuing to improve in all markets, the research firm said, with most previously allocated products now above normal inventory levels.

Distributors confirm some stabilization, but lead times are still “all over the map,” Phil Gallagher, president of Avnet Inc.’s electronic components business, told analysts in February. “Everyone is assuming the lead times are coming in due to some announcements to some large consumer companies. And frankly, we’re just not seeing that yet. Some of the capacitors, they might be stabilizing, but [we are still seeing] 38 weeks, 42 weeks, 30-plus weeks. It’s not like all those products are getting freed up. All indications for passives and resistors are lead times are going to stay up there for a little while.” 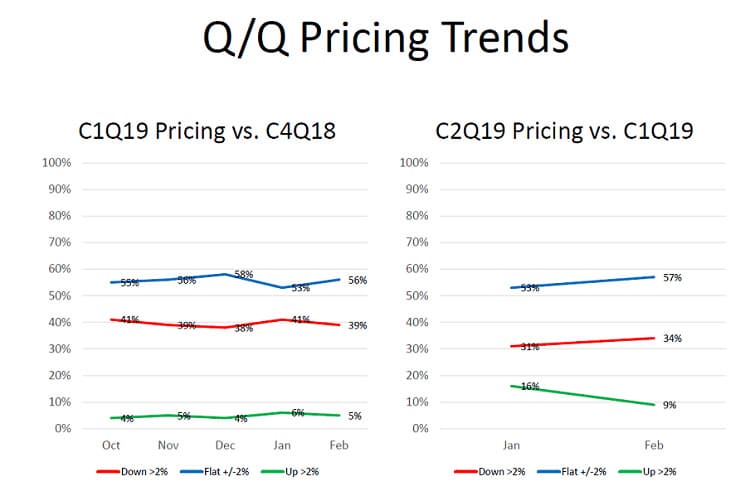 Component prices are expected to decrease in Q2, according to 34 percent of TPC respondents. More than half of respondents–57 percent–expect pricing to generally be flat while only 9 percent expect it to increase.

Lower pricetags will depend on the component, however. The recent shortage enabled many suppliers to hike prices and phase out older technologies. Latest-generation devices will likely hold their value. For semiconductors, the long-term outlook remains promising, according to the SIA, due to the ever-increasing semiconductor content in a range of consumer products, artificial intelligence, virtual reality, the Internet of Things, and 5G.

TPC provides ECIA with a monthly report on a market trends survey administered by Glenn Hitchcock, TPC founder and president. The report provides results from a survey sent to 20,000 electronic industry professionals across the globe to assess their expectations for order activity and inventory levels.