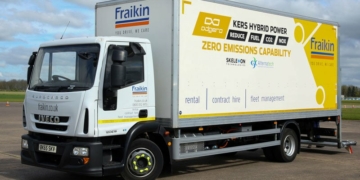 Fraikin Harnessing the Power of KERS with Skeleton Technologies’ Ultracapacitors

Fraikin Harnessing the Power of KERS with Skeleton Technologies’ Ultracapacitors 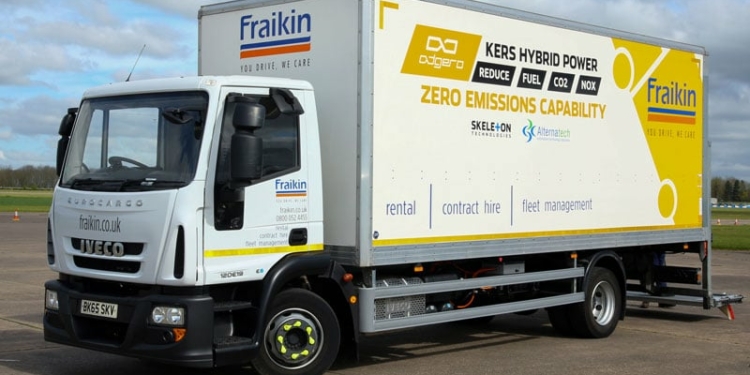 Jul 17, 2017 – Skeleton Technologies, together with Fraikin, one of the largest fleet operators in Europe, announced the first installation of a Kinetic Energy Recovery System (KERS) in a rigid truck – a 12-tonne Iveco Eurocargo from Fraiking’s rental fleet – in what represents a major step forward in urban truck operations that provides operators with significant fuel savings while also cutting emissions.

The KERS system works by harnessing the energy created under braking. This energy is stored in a set of SkelCap ultracapacitors – a lighter, less costly and more efficient alternative to lithium-ion batteries – then used to provide acceleration assistance via an electric motor fitted to the prop shaft.

“We talk to customers every single day about new ways to reduce environmental impact – it is something we are really passionate about. By being the first adopter of KERS on a rigid truck, we have put our customers at the front of the queue to trial this new technology within their own fleets.”

“The partnership with Fraikin highlights the significant impact utilising regenerative braking technology and energy storage can have. This is an important first step in realising essential efficiencies for the industry and we look forward to seeing further advances in this field.”

A conservative estimate for an operational life-span of the system is 10 years, often longer than the working life of the vehicle it is fitted to. It has been designed to be removed and re-fitted to a replacement truck when required.