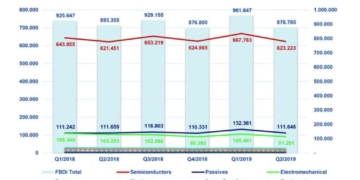 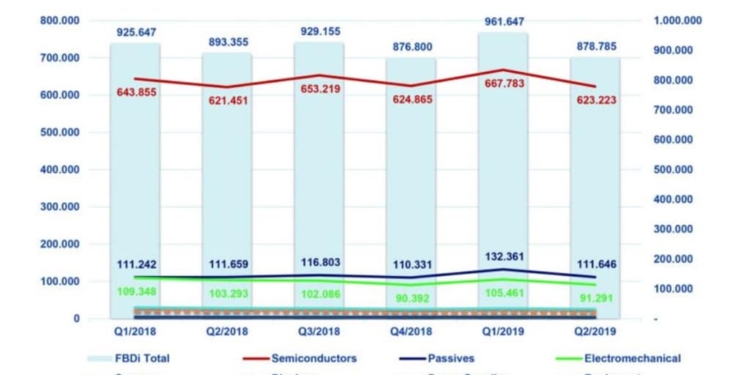 For the first time in two years the falling orders for German component distribution have resulted in a slight drop in turnover.

Sales of distribution companies under the umbrella of the Fachverband Bauelemente-Distribution (FBDi e.V.) dropped by 2% to €879 million.

Orders further weakened to around €748 million, equating to a book-to-bill ratio of 0.85.

Regarding the major product segments, semiconductors and passive components remained at the previous year’s level (€623 million or €112 million), electromechanics dropped by 12% to €91 million, power supplies dropped by 7% to €26 million.

The smaller product segments (displays, assemblies and devices) also declined, only sensors grew by 22%. The market share has scarcely changed: semiconductors held a 70% share, passive components 13%, electromechanics 11%, all other segments combined to 6%.

“Unfortunately, it appears that the return from an overheated market back to normality turns out to be too normal,” says Georg Steinberger, FBDi Chairman of the board comments, “order situation, especially in regards to semiconductors and passive components, is poorer than expected. But, concerning the turnover there is already winners and losers, i.e. memories, opto-electronic components and passives (except of capacitors). After all, the first half year closed still with a total plus of 1%. For the second half year we must assume a minus due to declining orders.”

WThe general uncertainty caused by Brexit, controversy in customs and other macroeconomic distortions will remain, according to Steinberger.

“If we are very realistic and we add hard realities –  like climate change, end of throwaway society – to the political confusion, this leads us to mixed prospects for the short-term market development,” adds Steinberger, “on a long term, I am convinced that only sustainable technology and innovation can contribute to a macrosocial solution. This  is a big challenge, but offers huge potential for our industry.”