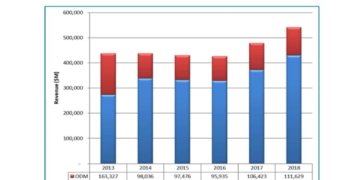 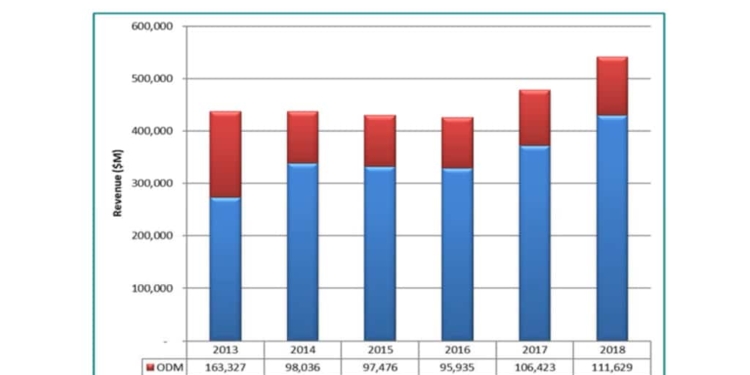 Combined EMS and original design manufacturer (ODM) revenue grew by $70.7 billion in 2018. Revenue growth from 2013 to 2016 had been flat, according to The Worldwide Electronics Manufacturing Services Market – 2019, but expanded dramatically in 2017 and 2018.

The EMS market has been sustained by the strong demand for smart phones, and the even more powerful demand for infrastructure networking equipment to build out the 5G wireless architecture with products like enterprise storage systems, enterprise LANs, and servers, according to NVR. The need for cloud computing, social media, and real‐time data and video streaming is driving the need for advanced switching, routing, and wireless communication hardware.

Plant closures and openings were rare in 2018, said NVR, as most companies appear to have right‐sized their operations or closed facilities due to consolidation. New openings are clearly related to new business opportunities, while the closures are being driven by economic decisions such as right‐sizing the company.

Communications and computer products will continue to be the segments driving the largest growth in the electronics industry. Fueled by the demand for EMS services, the contract manufacturing industry will grow from $542 billion in 2018 to $777 billion in 2023, at a CAGR of about 7.5 percent.

Outsourcing has become a critical element in keeping the electronics assembly industry expanding and driving costs down each year, and is a leading factor in stimulating continuous consumer demand and technology deployment. The trend to move price‐sensitive manufacturing to low‐cost regions has ceased, but will continue to impact the industry for all suppliers in the foreseeable future— at least regionally.