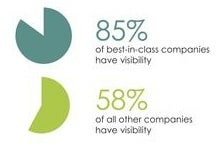 Some might say that 2016 was the year of supply chain disruptions. Unfortunately, 2017 is likely to be very similar. Especially in the electronics supply chain, with its global reach and quickly changing demands, managing and planning for the unexpected is critical.

Damages, late shipments, and quality issues top the list of the biggest disruptors, according to Aberdeen Group’s October 2016 report. However, regulatory changes, port closures, labor strikes, political unrest, and a myriad of other complexities add another layer of risk for most organizations and an often lead to huge financial losses.

To quote an old adage attributed to Benjamin Franklin, those who fail to plan, plan to fail. Leading organizations are working hard to stay ahead of the curve of unforeseen events. Whether an important shipper or supplier goes bankrupt or the organizations’ IT infrastructure is hacked reacting early and aggressively is the most likely path to mitigation. The second key to success is having systems in place to provide quick visibility and access to granular data that can inform what action might be needed. Good data leads to the ability to monitor and course correct to keep things on track in the face of changes. Early information is both cheaper and more effective.