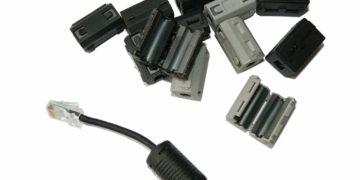 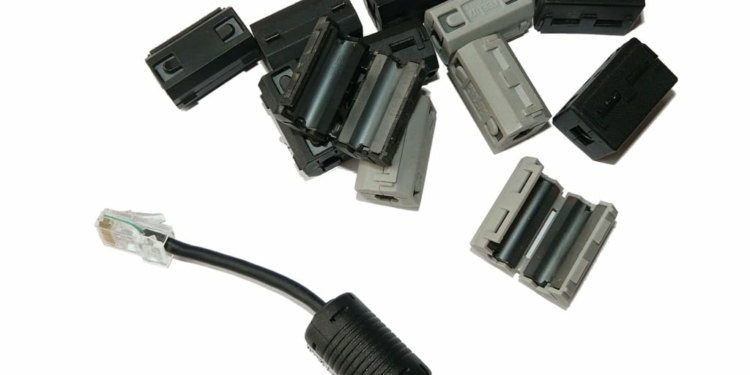 How to reduce EMI using ferrite beads? Ferrite cores can be a bit tricky, which is why it’s important to first understand the theory behind them. Most electronic components are essentially plug and play; however, ferrites have to be designed into your system. Once you know the theory, it’s time to move on to practical uses like LC filters, ground and power frequency plane separation, and source noise filtering.

Ferrite LC Filters
Designers are often tempted to think of ferrite beads as low pass filters. They do block high frequencies, but only in a specific band. Above that band their inherent capacitance frequency takes over. While a bead by itself can’t make a low pass filter, when combined with a bypass capacitor it can. Then you get what is essentially an LC (inductor and capacitor) filter. One major problem to look out for when using a ferrite bead like this is LC resonance.

First things first, if you’re using a ferrite bead in the power supply line of your circuit you need a bypass capacitor. At low frequencies ferrite beads act as inductors, which oppose changes in current. That means if your integrated circuit is trying to draw a spike of current, the bead will resist that peak and can hinder your circuit’s operation. A bypass capacitor is needed to store up charge that can provide those power spikes. Bypass capacitors are also just a good idea in general.

Once you have your capacitor and ferrite in place, you can start filtering out high frequencies. A ferrite bead has a couple advantages over the normal inductor used in an LC filter. Ferrite beads will give you a steeper roll-off at lower frequencies. They also have some inherent resistance, which helps dampen possible resonance frequency. While they have some damping capabilities, LC resonance can still occur. There is an especially great risk of this when using larger capacitors. If you really want to use a large capacitor, that risk can be mitigated by adding additional damping or limiting resonance in other ways. If resonance does occur, it can lead to a gain of up to 10 dB, so take care to design your filter to avoid resonance.

Mixed Signal Ground/Power Plane Connection
One of the primary ways that EMI can propagate through a circuit is through the ground and power planes. This is especially common in mixed signal circuits, where a single ground/power plane impedance is used for both analog and digital signals. It’s therefore best to have separate ground/power planes, but the grounds still need to be referenced to the same relative voltage. These problems create quite the quandary, one that ferrite beads can help solve.

Ferrite beads can be used to connect separate analog and digital ground/power planes. In this configuration, both planes are referenced to the same voltage, but are insulated from one another. A carefully chosen bead can block noise that would normally be transferred directly from one plane to another. Not every circuit should use separate ground planes connected by a ferrite bead, so check that this structure is the best for you before using it.

General Noise Filtering
Ground and power planes aren’t the only parts of your circuit that have noise problems. You also may have noise coming from digital components, a DC/DC converter, or the power line coming in. Ferrite beads can help filter out noise from all of these sources.

In the case of noisy components, you can use ferrite beads to isolate as many of them as you want to. You will presumably have bypass capacitors for each of your digital ICs, so adding ferrite beads will form the aforementioned LC filter. These filters will attenuate noise coming from the components and help keep your circuit clear of EMI.

You may be worried about noise coming in from outside your board. Oftentimes EMI is introduced to PCBs through their initial power source. Ferrite beads are great for filtering out that kind of high frequency noise. In fact, that’s their most common usage.

Whether your PCBs are blasting off into space or staying here on the humble Earth, they need to be protected from EMI. Ferrite beads can do that, either by attenuating a specific band of high frequencies, or acting as an LC filter when combined with a bypass capacitor. If you’re going to use a bead in an LC filter, be sure to watch out for LC resonance. You can also use ferrite beads to separate ground and power planes in mixed signal circuits, and filter out noise in general.