Analogue Devices has combined switched capacitor and inductive buck conversion in the same topology to reduce the size of step-down dc-dc converters.

Called LTC7821, this is “industry first hybrid step-down synchronous controller that merges a switched capacitor circuit with a synchronous step-down controller, enabling up to a 50% reduction in DC/DC converter solution size compared to traditional step-down solutions,” claims Analog. “This improvement is enabled by a thee times higher switching frequency without compromising efficiency. Alternatively, when operating at the same frequency, a LTC7821-based solution can provide up to 3% higher efficiency.”

The design appears to own a lot to the 500W LTC7820 fixed ratio dc-dc converter the firm launched in July last year.

In the LTC7821 hybrid design, the mosfets switch in pairs (see featured image diagram) with M1 and M3 together, alternating with M2 and M4 together.

The first thing this does, through switching interaction between Cfly and Cmid, is to maintain Vin/2 on the top of Cmid – affectively the input to the buck converter.

However, switching timing is controlled by a current-mode loop monitoring the inductor:

Just as with the earlier LTC7820, the LTC1821 has a start-up mode in which Cfly and Cmid are pre-charged to Vin/2 before main switching is initiated to prevent huge currents flowing. The two chips also share a totem-pole scheme (see Schottky diode chain) which supplies boot-strap voltages to the internal n-channel mosfet drivers.

The chip operates over 10-72V (80V absolute max) producing outputs from 0.9 to 33.5V with current measured in 10s of amps – depending on the external components. 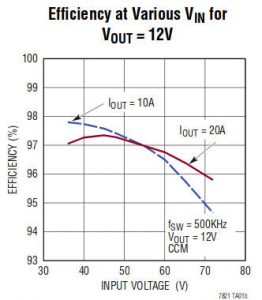 In a typical 48V to 12V 20A application, said the firm, 97% efficiency is attainable at 500kHz: “The same efficiency can only be achieved in a traditional synchronous step-down converter by switching at one-third the operating frequency, resulting in the use of much larger magnetics and output filter components.”

Switching is fixed-frequency, programmable from 200kHz to 1.5MHz.

Other claims for the hybrid arrangement are low EMI and reduced MOSFET stress due to the soft-switched front end.