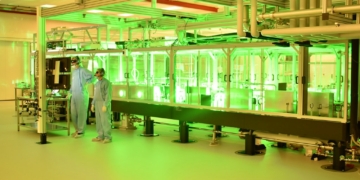 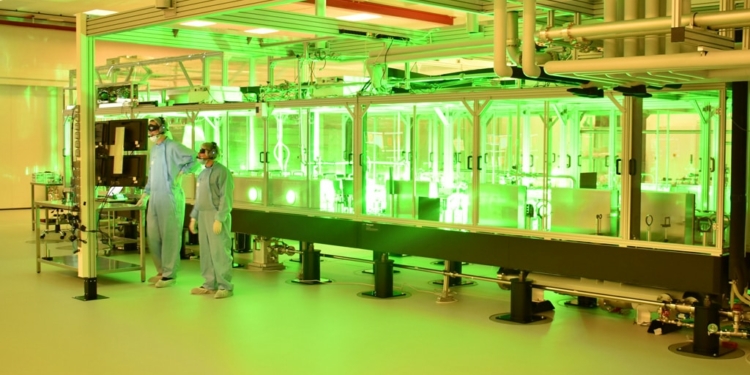 The L3-HAPLS laser system, developed by Lawrence Livermore National Laboratories and powered by EVANSCAPS from Evans Capacitor Company, has been deemed fully operational and is ready for use in ELI Beamlines Research Center in Dolní Břežany, Czech Republic.

In June 2017, the L3-HAPLS Laser, the world’s most advanced and highest average power, diode-pumped petawatt laser system, was delivered to ELI Beamlines Research Center in Dolní Břežany, Czech Republic. After integration into the ELI Beamlines facility, the laser was evaluated by an international peer review group and deemed fully integrated and operational. The system is now ready for use in its first experiments.

The L3-HAPLS Laser was designed, developed and constructed by Lawrence Livermore National Laboratory.  Leading the L3-HAPLS project allowed LLNL to draw on its decades of pioneering laser research and development and apply that expertise to advance new laser concepts important for its mission as a national laboratory. The system consists of the main petawatt beamline capable of delivering 45 joules (J) of energy per pulse and is energized by diode-pumped lasers, capable of delivering up to 200J of energy per pulse.

The system has now been ramped to its first operation point of 16 joules and a 27 femtosecond pulse duration at a 3.3Hz repetition rate (3.3 times per second), equivalent to a peak power of approximately 0.5 petawatt after the pulse compressor. This operational point was established to learn and conduct first experiments at a moderate repetition rate.

According to the development engineers at LLNL, “The capacitors deserve special note as they are a major enabling technology that reduce the volume of the capacitor bank by at least a factor of three while providing better ripple current characteristics and superior cooling compared to standard electrolytic devices. The use of these capacitors allows the incorporation of 100J of energy storage in approximately 3.5 cubic inches.”

The L3-HAPLS laser’s ability to focus high intensity petawatt peak power pulses on a target will enable unparalleled access to variety of new research projects in fields including time-resolved proton and X-ray radiography and laboratory astrophysics. It will also help research basic science and medical applications for cancer treatments and industrial applications such as nondestructive material evaluation and laser fusion.

more details can be found in LLNL article here.

featured image: The L3-HAPLS advanced petawatt laser system has been declared fully integrated and operational at the ELI Beamlines Research Center in Dolní Břežany, Czech Republic, and is now ready for integration with the experimental systems and first experiments. Image credit: LLNL